Far away from the traditional touristic sights, there is a cemetery in Rio de Janeiro that is really worth visiting. São João Batista is like the Recoleta – the famous cemetery in Buenos Aires – of Rio de Janeiro. Just a little less famous. It is a cemetery with an awesome view of the Corcovado Mountain and the Christ Statue on top of it. And São João Batista is seen as one of the biggest open air museums in Brazil, because of all the artistic gravestones and even mausoleums that you can find there.

This cemetery in Rio de Janeiro is located more or less in the middle of the city, which you might find weird, but in fact it used to be at the edge of old Rio de Janeiro. Like you see in villages or other cities: cemeteries are to be found on the outskirts. It was built around 1850, when the neighborhood Botafogo was where the city stopped. The famous neighborhoods at the beach, Copacabana and Ipanema, were not built yet.

The -catholic- cemetery São João Batista is huge, around 183 thousand square meters. As big as around 26 football fields. Around 25 thousand graves can be found here, and around 70 thousand people are buried at the cemetery. Brazil is the world biggest Catholic country and around 75% of its 210 million population calls itself catholic. The Catholicism is in decline though, and losing ground to the upcoming Evangelic churches. This religious sentiment is the reason why in most of Brazil people are still buried when they pass. However, São João Batista is developing the option to cremate people, one of the first cemeteries to do so.

This cemetery is called the cemetery of celebrities. It is place where a lot of people that have written Brazil’s history are buried. Since Rio was the capital of Brazil until 1960 there are a lot of political figures, under them ten ex-presidents. But a walk through the place will get you acquainted with 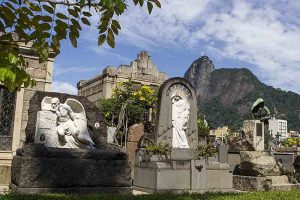 Renowned author Joaquim Machada de Assis was the first writer to be buried there together with his wife. Since then all writers and members of the Brazilian literary academy are buried at São João Batista with their wives.

The story of Mario Filho

Interesting is the story of Mario Filho, which shows you how he was responsible for major developments in two key areas of the Brazilian society: football & carnival. Most people know the Maracanã stadium, but who knows its real name? The real name is Estadio Jornalista Mario Filho. Inaugurated in 1950 for the World Cup that took place in Brazil. Filho is considered the father of sports journalism, because he founded the first daily sports newspaper O Mundo Esportivo. He was the one who created the first national competition. Since Brazil is such a huge country, the state championships were the highest competitions for teams, but he took the champions of the biggest states and let them play a tournament to decide the champion of Brazil. 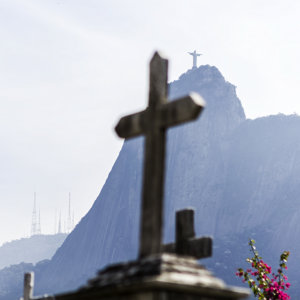 He is also the one that created the competition between the Samba Schools during the Carnaval parade in the thirties. The scores were published in the newspaper, giving great popularity to this event. Until today, the announcement of the scores and the eventual champion of Carnaval is enormously popular. All cariocas gather in bars to see the scores given live on television.