We offer two options to do a bike tour in Rio de Janeiro:

A bike tour that will take you from Copacabana to the shores of the Bay of Guanabara and to Lapa and Rio’s historical center. Making use of the new cycle paths you’ll bike through the lively backstreets of iconic neighborhood Copacabana heading to Botafogo. There you’ll pass by Rio’s ‘celebrity’ cemetery, São João Batista, resting place of several Brazilian presidents, writers, singers, actors and also renowned Brazilian architect Oscar Niemeyer.

From there you’ll pedal to the Bay of Guanabara, along the beach of Flamengo, local of the first European settlement after the discovery of Rio de Janeiro. After Flamengo the route continues to the historical center of the city, with stops at Cinelândia and Lapa, well known for its nightlife and the `Steps of Selarón’, 250 steps covered in more than 2000 tiles from different countries.

On the way back you cycle along the paths winding through Flamengo Park, designed by famous Brazilian landscaper Burle Marx. The last stretch of the tour will pass along Copacabana beach. You can read our blog about this experience here. 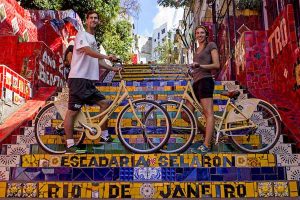 The Urban Tour is a cycling tour in Rio, focusing on the southern part of the city. You’ll visit several of Rio’s famous sites, but also some of its traditional neighborhoods. We’ll start at Copacabana beach, to experience where big part of the social life of the locals is spent.

From there we will bike on to Sugarloaf Mountain, to view its imposing vastness up close (we will not visit the Sugar Loaf itself). The tour will also include a stop at nearby Praia Vermelha (Red Beach),a tiny oasis of quietness.

Leaving Praia Vermelha behind us, we will pedal to the lively neighborhood of Botafogo, to get a glimpse of the back lanes of Rio. This stretch of the bike tour will give you a closer look at how real Cariocas (people from Rio) live when they’re not on the beach. The last part of the trip will lead to Lagoa, the big city lake, which is surrounded by green hillsides and fancy neighborhoods. 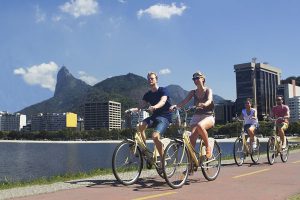 The  Panoramic tour takes about 4 hours. You have to be able to bike around three hours.

The Urban tour takes about 3 hours. You have to be able to bike around two hours.

Suitable for kids from 12 years old.
The tours can be done in three languages: Dutch, English or Portuguese.