One of the best times is when the Carnival in Rio starts. It is a once in a lifetime experience, that gives you the opportunity to dive into the heart of the Brazilian culture. The biggest propulsion in all this is passion, it is always present; sometimes clearly visible, but most of the time just simmering under the surface. On this page we give you a great introduction in what Carnival in Rio de Janeiro is and what it takes to experience it like a local. 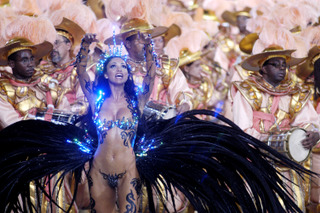 The Carnival Parade in Sambódromo

The actual parade competition takes place in a stadium called Sambódromo. It is the images from here that is what most people associate with carnival in Rio de Janeiro. But Sambódromo is serious business; This is where the samba schools of Rio de Janeiro try to out perform each other every year before tens of thousands spectators watch up to 4500 participants of each school trying to win the favour of the judges. Categories like theme song, drum section and coordination is what is taken in to consideration.

To go and see the event in place is for sure worthwhile. Sambódromo is divided into various sections. The tickets are sold beforehand, it’s not recommendable to buy through agencies abroad since a lot is added on top; Just before Carnival you can get tickets all over Rio. Online sales through some sites also offer quite cheap tickets. It is a good idea to contact a local travel agency to see if they can help and give you the prices. If you are willing to take your chances you can wait until midnight on Sunday or Monday and try to make bargains on the black market, command of Portuguese and a good eye for scoundrels are two good companions in this case.

When you already have the tickets

If you already have your ticket getting there early (around 7 PM) to get good seats is a good idea (they are not numbered). Bring a pillow for your tush. The parade starts around 9 PM and goes on into the morning next day. Getting to Sambódromo is best by taxi, because the area surrounding the stadium is a bit dodgy.

Walk in the parade yourself!

We have a unique offer for you: you can join our group and walk in the parade yourself! Don’t miss out on this once in a lifetime experience. Check this page with more detailed information. 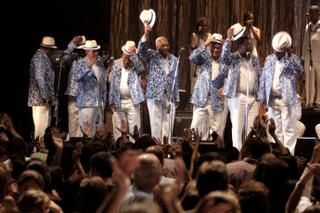 You probably have heard about the samba schools in Rio de Janeiro. The name samba school itself is a bit misleading, You don’t get lessons in Samba, far from it. A samba school is more like a sports team that once a year during Carnival compete in a big parade competition held in Sambódromo (the Samba stadium). The samba school is often connected to a community and functions a bit like a community center. The members of each school work hard for several months building parade cars, making costumes, practicing dancing and drumming. But they also have a big social impact with events for the community.

All samba schools in Rio have so called rehearsal parties, it is more or less a samba party with part of the school’s drum section (around 50 of them) and a small show displaying the skills of the dancers. These parties are held in big warehouse like buildings who can hold many thousand people and the main function is to raise money but it’s also a way for the community to meet and party.

Getting To the Samba Schools in Rio

Many tourists visit these samba rehearsal parties of the samba schools, most of the year it is practically the only way to experience the powerful rhythms of Carnival Samba. Displays by skillful dancers and some serious ass shaking guarantees a good time. Mangueira and Salgueiro are two examples of popular schools. The schools take a break from when Carnival ends until August when they start and go on all the way until Carnival starts again.

Street Parties – The Best Part of the Carnival in Rio? 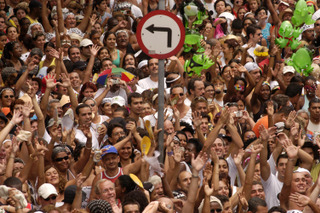 A Group of Friends

In Rio groups of friends meet up to play Samba, dance and socialize, if they grow in popularity they can turn in to so called blocos. These have meetings/street parties on a more regular basis, during Carnival they all have ensaios when they parade around a designated street block (hence the name bloco). Everyone can of course join these street parties.

With some exceptions these blocos start to meet from November all the way until Carnival. There is no official forum with information how and where these parties are held, it’s all more ore less on a mouth-to-mouth basis. But keep an eye on our Instagram account, because we will post all updates in our stories before and during Carnival.

The History of Carnival in Rio 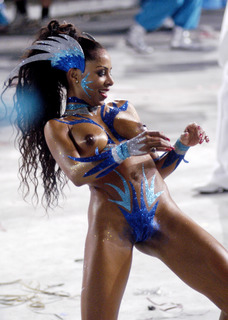 The original roots of Carnival (Carnaval in Portuguese) are in ancient Greece as a spring celebration for the wine god Dionysos. This custom was taken over by the Romans who celebrated Bacchus (the Roman equivalent to Dionysos). They introduced excessive amounts of food and drink as well as big orgies where slaves and masters exchanged clothes. In Rome, the Catholic church took charge, but the yearly ceremony was continued. Now it became a last outlet before Lent, the forty days of fasting and abstinence before Easter. This week was very non-Christian and full of sex, intoxication and sin. The word is from Latin Carne Vale (In English: Farewell to the Flesh).

To The New World

Carnival spread to the new world and it was here it became this exciting mix of cultures that we have today. In New Orleans you have Mardi Gras and in Trinidad & Tobago you have the only real competitor to the Carnivals in Brazil. In Rio de Janeiro the Carnival has been present since the mid 19th century, only around 1920 the unique music called Samba was incorporated. It was also then it became really popular with the masses. Samba is a style of music that have evolved in the slums of Rio, the favelas, and is a mix of influences from mainly Europe, Africa and South America.

A Mix Of Cultures

What this feast is like in different parts of the world has obviously cultural explanations. You can understand a lot of the culture in Rio by understanding the history of Carnival: The party is from Greece, the dressing up is from Rome and the rhythm is from Africa and the frivolity from the Indians. And until the African influences became present the whole thing was a lot less intense and interesting, something that is not that hard to believe since Catholic Europe was a quite strict environment.

To finish here some General Tips for Carnival, to make your stay smoother, better and safer.