Once an area where the aristocrats of Rio de Janeiro had their country houses, the neighborhood of Botafogo (literally: set it on fire) is the going-out-savvy-place-to-be these days. Without the nice beach promenade, as in Copacabana and Ipanema, hip Botafogo is often overlooked by the visiting traveler. A seriously missed opportunity though. The neighborhood was recently elected as one of the 50 neighborhoods in the world you definitely should visit. 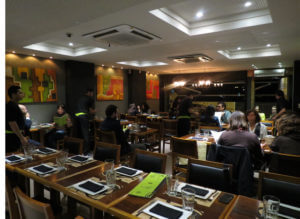 To start your day in Botafogo, you could have a nice and healthy breakfast at Colab. Owned by Rodrigo Abe, a Brazilian from the neighboring state Minas Gerais. If you’re looking to get rid of a hangover, they also offer an original English breakfast, one of the few places in town. They open at ten in the morning, but you easily could come back here for lunch or at night. Often they have DJ’s, open jam sessions and other small events in the evenings. 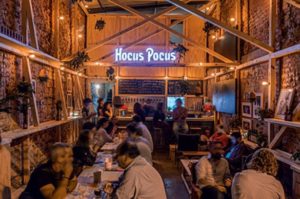 A short walk from Colab is another innovator in hip Botafogo, Hocus Pocus DNA. Located in a former garage, with high ceilings and brick walls, craft beer brewer Hocus Pocus DNA is a hit with the locals. The beer brand was elected as Rio’s best brewery in 2016 and is still one of the favorites under the locals. The place offers its great variety of beers in combination with oriental food, while you’re seated at shared long wooden tables. If you’re not beer drinker, don’t worry, they also have a variety of cocktails on their menu. Think of mixes of Sicilian lemon, tangerine with Amazzoni Gin. On Friday night it is one of the places to be to start your weekend. They open at six o’clock.

Another cool spot is South Ferro, run by New Yorker Shei Shiroma. “This is my New York”, said Shiroma recently to a Brazilian magazine, referring to the Soho vibe in Botafogo. His food arrangements are different. More tasty and reach from noodle soups, curry wottons to slices of pizza topped for example with homemade andouille sausage. Recently Shiroma became a father and decided not to open during the day any more, only in the evenings.

However, if you’re not in the mood to wander around too much, just stick to Rua Nelson Mandela. This is between Rua Voluntários da Pátria and Rua São Clemente, across the metro station of Botafogo. There you’ll encounter a bunch of bars and restaurants. Offering typical Brazilian food, Asian cuisine and Arabic dishes. It’s always crowded, with a chill vibe. It’s adjacent to a nice square, where live music and DJ’s can be found in the weekends,