As a first time visitor in Rio de Janeiro – read our guide! – there are a few things that need to be on your to-do list. You have the Sugarloaf Mountain, you have Copacabana beach, maybe the colored Stairs of Selarón. But without a doubt, a visit to Christ the Redeemer, the famous Rio de Janeiro statue, is number one on most lists.

Since the world famous statue was chosen as one of the seven new wonders of the world, the popularity of the monument — 2 million visitors per year — seems more than fair. But a visit to the statue is not complete without knowing at least a little bit of the history. So here we are, some pretty unknown facts about the Christ the Redeemer in Rio de Janeiro. 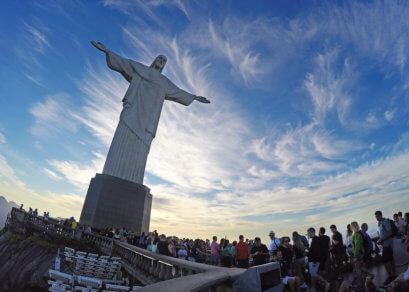 The Design of the Rio de Janeiro Statue

Initially, it was planned for the statue to have a cross in his left hand and a globe of the world in his right. But after fierce criticism, the statue was redesigned to the current famous version the world has come to love. The body of the monument was constructed in Brazil. But the head and the arms were made of reinforced concrete in France, by sculptor Paul Landowski with some help of a Romanian artist. They were shipped to Brazil in 58 separate parts, 50 for the head and 8 for the arms. Because of the altitude the statue was projected to resist wind speed up to 250 kilometers an hour. This means the statue in Rio de Janeiro is able to weather even strong hurricane winds. The laying of the first stone was on April 4 in 1922 and it would take 9,5 years to finish the construction.

The Heart of Christ the Redeemer

In the middle of the chest of the monument, there is a little heart. It measures 1.3 meters and is the only part of the Christ the Redeemer that was projected towards the inside of the statue. Two of the most important engineers of the project, Heitor Levy and Pedro Fernandes Viana, placed a parchment inside a little box of glass with the family tree of both families as a demonstration of faith and gratitude.

The Christ has a height of 38 meters, the statue has 30 meters and the pedestal has 8 meters. This equals a building of more or less thirteen floors. Since it was built on top of the 710-meter high Corcovado Mountain, its greatness is seen from the most parts of Rio de Janeiro. Though the statue is one of the tallest in the world, there are three other statues of the Christ higher than the one in Rio – located in Vietnam, Poland and Bolivia. In 2007 the Christ the Redeemer in Rio de Janeiro was chosen out of 21 finalists as one of the seven new wonders of the world.

The idea was to build the statue for the 100-year celebration of the Brazilian independence. Even though Brazil is the biggest Catholic country in the world, the State and Church were separated. Then it is pretty amazing that such a big and important monument has such a religious meaning. Lots of locals think of the monument less in religious and more in a liberal way, as a warm welcome — with open arms — for all the people visiting the city. 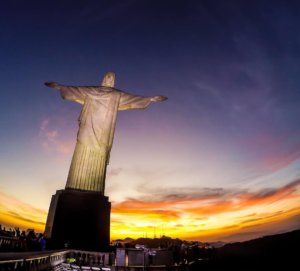 The cost to build the statue in current value would be around 2,5 million euros. Compare this to the Statue of Liberty, that had a cost 24 times higher, and the Christ turns out to be quite a cheap project. All the money came from donations made by Brazilians. Stories about the Christ being a gift from some country are not true. The idea came from Brazilians and it was the Brazilians, mostly the locals from Rio de Janeiro, who paid for it.

The monument, which is made of concrete, is covered with millions of little tiles of soapstone. Temperature variations and the salt of the ocean almost do not influence this type of stone. It remains a soft rock. The rock was crushed into little pieces and then applied on all parts of the statue, creating a gigantic mosaic. It is said that the workers who prepared the little stones, wrote the names of their families on the backside. Which means the Christ the Redeemer in Rio de Janeiro is full of hidden messages. 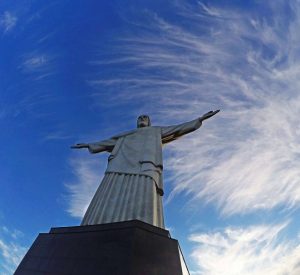 The Christ the Redeemer in Rio de Janeiro may be big and one of a kind, it’s not untouchable. Once in a while, around three to four times per year, lightning hits the statue. Normally this doesn’t bring much trouble, since there are little lightning rods all over his head, shoulders and arms. But in 2014 the monument was hit twice in a month, two fingers and the head were damaged. It took more than four months to repair the damage. The statue has regular restorations, to fix cracks and water damage. The last big one in 2010 and the next one planned for 2020.

Together with the opening of the monument, there was illumination installed to light up the Christ in the dark. With a clear view from the port, a sailor man left his ship for drinks and women. Just when he stepped outside all of a sudden he saw Jesus appear up in the clouds. With no idea of what was going on at the top of the mountain, he was in shock. He turned around, went back to the ship, called the father and made his confessions. Just to show how big of an impact the whole construction of the statue had. The sailor man then never touched alcohol anymore. Though nothing is said about women.

Check out our Top 5 of Highlights in Rio de Janeiro to see all information about these places.