Copacabana Beach is for sure one of the more famous stretches of sand in the world. The image of a immensely crowded beach full of people worshipping the sun is well spread. But what is it really like?During recent years the area Copacabana has started to change to something better. Less and less working girls, beggars and street crime. Dirty corner bars are being replaced by chique juice bars. The effects of this can also be seen on the beach. 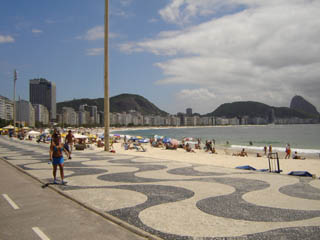 The area still has a lot to offer, there is something special with that almost perfect crescent. So what is good to do?

The Night
For me the night is one of the best times to appreciate Copacabana Beach. To sit at a quiosque with a Caipirinha in the evening is definitely something you should try. A good advise is to pick a table a little bit back from the stream of people passing by; By doing that you will avoid that almost endless stream of beggars, vendors and weirdos. To be the observer is fantastic but it’s not always all that pleasant to be the target.

Early Morning
Another great thing to do is to wake up early (6-7 AM) and have a walk along the beach; you’ll find that thousands of people start their day doing just that. Walk your way up and down the beach and finish off with a green coconut, it’s a great way to start your day. 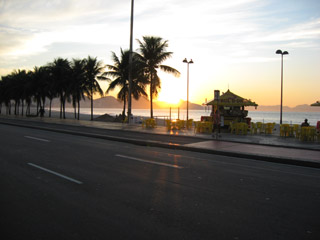 Sports & Exercise
You have volley ball, beach volley, foot volley, football, frescoball, jogging, surfing, boogie boarding and so on. The numbers of sports exercised on Copacabana beach is immense. On Sundays and holidays half of the beach avenue Av. Atlântica is closed for traffic; Then you have people on bicycles, skateboards, rollerblades, joggers all taking advantage of that beautiful beach walk.

Forte da Copacabana
If you stand at Copacabana beach looking at the sea, on your right hand side you have a military installation, it’s Forte da Copacabana (English: Copacabana Fort). Now inactive and a museum it’s possible to enter the area for a small fee, it’s well worth it. There is a really nice café called Confeitaria de Colombo inside, further out you have some really nice views of the city and the sea. The museum is included in the admittance to the area so while you’re at it have a look.

Reveillon (New Years)
Probably the biggest annual party in the world is held on Copa beach every New Years. It is a spectacle and an experience for life. Read more about New Years Eve to find out more about it. 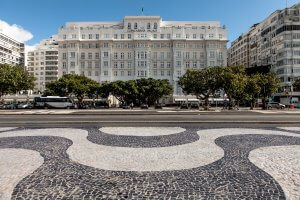 It started to get famous with the opening of the luxurious hotel Copacabana Palace 1923, Hollywood stars became a common sight. It quickly became popular with the people. Soon many residential houses were built and in the 1950’s and the 1960’s there was a boom of new residents. The new fashion in the 1950’s was to be on the beach and a beach culture started to develop. Surfing, beach volley ball, bikinis; all was part of the new trend. Many tourists also started to come. The decline of the Brazilian economy together with a steady stream of migration of poor people from the Northeast made the favelas grow and so did the number of people living on the street.

Prostitution, being much part of the Brazilian culture, found new expansion possibilities in the large number of poor young girls paired with many middle aged men on vacation from Europe and North America. In front of the big hotels there were now gringo men and prostitutes. The film stars stopped coming, the population got older, pollution and growing crime problems slowly changed the face of Copacabana Beach. Today the hip people go to Ipanema Beach; Tourists, working girls and old people dominate Copacabana. There are also always families from the neighbourhood; the proximity is convenient and they have no intention of trying to be hip.