The quest for Indian food in Rio de Janeiro

You’ll find Indian restaurants all over the world. Many times, it’s the perfect place for a quick cheap bite. Go to Berlin, Amsterdam, New York, or London, it’s almost difficult to escape them. Here in Rio de Janeiro, it’s different though. A quick guide to help you out on your quest to find Indian food in Rio de Janeiro.

To find an Indian restaurant you’ll have to search really good. You know why? There are only two Indian restaurants in this city of over six million people. Of course, it always possible to eat certain Indian dishes in different restaurants, like Sawadee in Leblon, or Orienthai in Botafogo, but restaurants that serve truly Indian food in Rio de Janeiro are very rare. 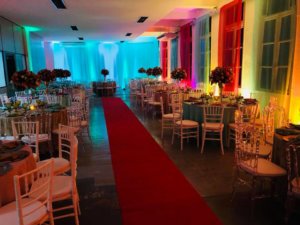 One is the Taj Mahal restaurant, while the other, a pure vegetarian eatery, is called Veggie Govinda. The first one is definitely not a cheap bite, while in the second you can have a good meal for about US$10. The Taj Mahal and Veggie Govinda take over where other Indian entrepreneurs tried before in Rio de Janeiro. Botafogo used to have an Indian restaurant, Raajmahal, run by an Indian from Uttar Pradesh, but it closed down. Natraj, on Avenida General San Martin in upmarket Leblon, was trendy for a while, until it also stopped functioning.

Besides Japanese food, Asian cuisine is not very popular yet in Rio de Janeiro. Cariocas, as the people of Rio are called, in general seem not to be that much into spicy food. A little bit more conservative than for example the people in São Paulo, where Indian food is easier to find.

The Taj Mahal is named after the famous ivory-white marble mausoleum in India, one of the seven wonders of the world. Located in the bucolic neighborhood of Jardim Botânico (Botanical Garden) the Taj Mahal restaurant opened recently, replacing Italian restaurant Quadrifoglio, which moved away. The restaurant is in the hands of Riju Konwar, originally from the Northeastern state of Assam in India, and his wife Angela, a Portuguese who grew up in Rio. In their words, the Taj Mahal is ‘not just a restaurant but a place that highlights the complexity of India and its hidden beauty amidst all adversities. It is culinary journey’.

A good way to measure a restaurant is by its customers. When Gringo-Rio went for lunch in the Taj Mahal, there were several Indian families eating, very much enjoying their food, as they shared their enthusiasm with us. They also advised us to ask for extra spicy if we liked our food hotter. Locals are not very accustomed to it and the food is a bit toned down to appease the cariocas. 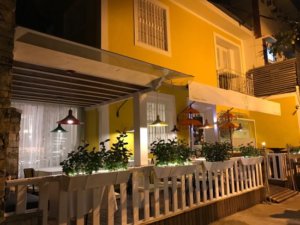 The flavorful paneer and fish tikka as starters couldn’t be more delicious. After that the mutton masala (lamb curry) and a butter chicken; they were excellent as well. You really can taste that the flavor selections were chosen with a care and that there is an Indian chef behind the dishes. The food had authentic taste to it. Together with the bright pleasant ambiance, and veranda to sit outside, the Taj Mahal is an asset for the scene of Indian food in Rio de Janeiro.

That can also be said about its vegetarian colleague in downtown Rio, Veggie Govinda. Even though less fancy  than Taj Mahal, Veggie Govinda offers good value for Indian cuisine. Daily the restaurant has two main plates, including salad and dessert. Don’t expect authentic cooking like you would get in India, but, it comes close enough for lovers of Indian food. The place is run by the Hare Krishna and the colorful restaurant has a chill vibe.

If you want to read more about restaurants in Rio, check out our guide here.