Just opened recently after a grand renovation, Casa da Gloria is an incredible place that is not well known amongst Gringos yet. It is one of those places where you can spend a lazy afternoon, eating, drinking and taking a dip in the natural pool. Located in a beautiful old mansion on a hill and a great opportunity to visit the neighborhood of Gloria in Rio, the villa attracts a diverse crowd of locals on a daily basis. For travelers it is a great location to visit outside the regular tourist circuit. Also, there are stunning views of downtown Rio to be seen from the house. Extra bonus: it is located next to Outeiro Da Glória, a historic church in Rio. It’s a beautiful chapel, famous for its celebrity weddings. In the past the villa also served as a Hare Krishna temple. 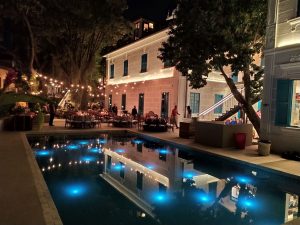 Easy to reach and centrally located

Casa da Gloria is part of the city’s history for a long time already. It was built around 1770 in the heart of Rio de Janeiro. The mansion is easy reachable by bus or metro. Only ten minutes from Rio’s downtown area and Santos Dumont Airport and 15 minutes from Copacabana. It has a large covered area with a kitchen, a lounge capable of accommodating up to 120 seated people and several rooms. You can get lost easy in this unique building. The large garden is splendid, full of fruit trees, birds and framed by the beautiful swimming pool.

On their Facebook page, Casa da Gloria is called a beer garden. We would rather describe the colonial mansion as a multicultural center, with a restaurant and bar. People come here in the morning to practice yoga. And during the day you can see art performances, got to workshops, listen to music or check out a craft beer event.

There are different events every month. You can go and experience the fermented food edition of Rio’s farmers market, Junta Local, for example. Enough space for plenty of stalls. And recently they even had a show by Zak Starkey; son of the drummer of the Beatles, Ringo Star.  Old school reggae musician U-Roy gave a performance here. Having said that, of course they also have regular performances of Brazilian musicians, playing traditional samba or choro.

Last but not least: it is a great place to get rid of a hangover after a late night out on Friday. On Saturday’s the bistro of Casa da Gloria offers an excellent brunch. They also have vegetarian and vegan options. The brunch opens at 10AM and lasts until 15PM. Don’t miss out on this option to visit the neighborhood Gloria in Rio and see a different part of the city.

Look up Casa da Gloria on the map