Waterfall in Rio de Janeiro – a hike through the forest

One of the great things of Rio de Janeiro is its easy access to the nature. In half an hour you can get out of the chaotic city and find yourself in the middle of nowhere, especially in the Tijuca Forest. To find a waterfall in Rio de Janeiro is not that difficult, you just get in the forest and start exploring the beautiful nature of the city. 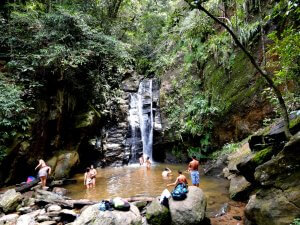 There are two ways to get to the entrance of the park of Tijuca in the neighborhood Jardim Botânico. The first one is by bus, line 409. The other one is by taxi. From the bus to the first waterfall it’s about a half hour walk. By taxi you just can say ‘Cachoeira (which means waterfall) Horto‘. The first waterfall, which is called Cachoeira do Quebra, is a small one, but still nice to get some pictures and refresh yourself. But the better waterfall is a bit higher and takes a medium level hike of around 30 minutes to get there. But it is worth the energy and time.

Once you get to Cachoeira do Chuveiro, which is better known as the waterfall from Horto, it’s just awesome. You are in the middle of the forest, and especially during the week it is a great place to hang out and relax – probably by yourself. In the weekends it is busy, since it is one of the most visited waterfalls by the locals of Rio de Janeiro.

For those that are not tired of exploring the Tijuca Forest and its waterfalls, it’s time to move on. The next stop: the waterfall of Jequitibá. We get back to the road, the starting point of the hike to the waterfall of Horto. From there it’s a 15 minutes walk to get to the start of the hike to Jequitibá. It is pretty clear where you should enter, since there is a little stairs made of wooden steps to enter the forest.

From there it is a short hike of 20 minutes to arrive at the waterfall. Here you have several possibilities to hang around, relax, refresh yourself and start a philosophical conversation about life. You are deeper into the forest and most people don’t go this far. This is a great chance to have the whole forest for yourself and escape the chaos of the city of Rio de Janeiro.

The walk back to the road is a bit heavier, since you have to go up. But it’s a short hike and with same basic level of fitness you will easily manage. The final part is the walk up to Vista Chinesa map, a wooden structure with Chinese architecture built in the early 1900s. 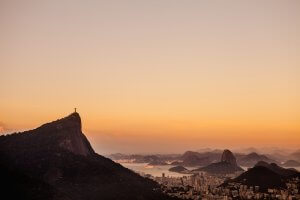 The view over there is amazing. This will take you at least another 30 minutes. There is a high probability of encountering a group of monkeys or even a tucan flying around. During the walk up you will already have some nice views at the Sugarloaf Mountain and the Christ Statue. Make sure to bring lunch, because there are no shops or whatever to buy any food or drinks over there.

After you took all the pictures you wanted and enjoyed the view, it is time to get back. By foot it will take you at least around an hour and half to get back to the Botanic Garden. If you have access to internet, you can already call an Uber. Once you are out of the park, there are some bars were you can get access to wifi as well. But it will still take you one hour to get to the area where you can order the taxi.

When you would like to do another hike in Rio de Janeiro, have a look at our blog about the hike to Pedra Bonita . Read more info about Tijuca Forest – where most of the hikes in Rio are done – and its natural treasures.