It’s not a surprise that Rio de Janeiro has plenty of good seafood restaurants.  With miles of coastline and a rich fishing culture, the city offers a wide variety of outlets with fresh fish on the menu. Here is a selection of our favorite places to eat seafood in Rio de Janeiro. 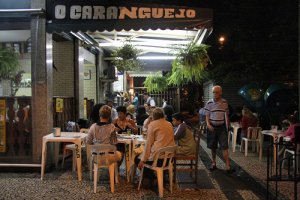 O Caranguejo (The Crab) is one those typical Portuguese style seafood places. Located in the heart of Copacabana it is decorated in a traditional way, while old-fashioned type garçons serve the clients. Locals know the restaurant especially because of its famous and often rewarded, delicious shrimp pastries. Their seafood dishes are great, but if you don’t feel like eating a whole meal, order a shrimp pastry, together with a draft beer, and you’ll become one of the locals.

In the middle of the bohemian neighborhood of Lapa, you’ll find seafood restaurant Mangue Seco. Close to famous samba club Rio Scenarium, the rustic restaurant is an excellent location to begin your long night out in Lapa. A favorite starter at Mangue Seco is caldinho de camarão, a very tasty and fresh shrimp broth. Other returning requests are for their moquecas, their seafood stews, rich in flavor and ingredients.

Award-winning Satyricon has been selected many times as the best seafood restaurant in town. Originally founded by the Italian Miro Leopardi, who passed away in 2014, the place now in command of his widow, Marly Leopardi. With an outlet as well in seaside village Búzios, their Ipanema location attracts a loyal crowd. Freshness is Satyricon’s mark and inside the restaurant an aquarium with fish, ready for the kitchen, proves that point. If you are too lazy to chose, or in for a surprise, just ask what the chef recommends.

In the mood to venture out to the bohemian neighborhood of Santa Teresa, up on the hills of Rio? In that case, don’t forget to drop by Sobrenatural, the local seafood restaurant. Having surfed a fire in 2015, the restaurant is back to its old form. Check out their baby octopus marinated in garlic and oil as a starter. The favorite of the house still is bobo de camerão,  a dish of shrimp in a purée of cassava meal, in a mix of coconut milk and other tasty ingredients. 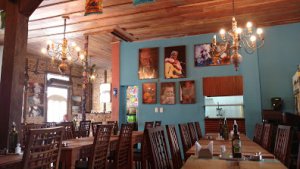 You won’t find them a lot in Rio, restaurants named after American child actresses, but the old school restaurant Shirley in Leme is one of them. Founded by Spanish immigrant Estrela Sánchez, a great admirer of Shirley Temple, the restaurant is what you call a typical Spanish seafood place. It is a bit cramped, tucked away in a narrow space, and in the weekend waiting lines are not very uncommon. Don´t let that scare you away if in your in for an authentic experience. Do try out Shirley’s paella, it’s a specialty of the house.