New Year’s Eve in Rio de Janeiro is always a special night. Just think of the millions of people, dressed in white, gathering on Copacabana Beach to watch the fireworks at midnight. If that’s too crowded for your taste, there are still a lot of other parties you can go to. We made a selection for you, but remember: they are not for free. 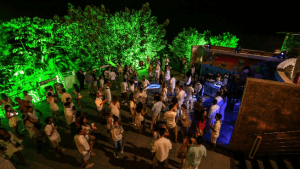 The first stop to Sugarloaf Mountain, Morro da Urca, will be the location for a great party on the 31st. Food and drinks are included in the bill. More than seven DJs and the famous drumband of samba school Mangueira will take of the music. Parents can bring their kids, while there also will be recreation area for the children to play. No need to worry about transportation: after midnight partygoers will have a transfer available to the Botafogo subway station.

Another great venue to say goodbye to 2018 is Rio’s Museum of Modern Art, better known as MAM. This party of 12 hours will have Rodrigo Penna and DJs Markinhos Meskita and Nado Leal in charge of the music. Included in the price are open bar and food prepared by renowned chef Ricardo Lapeyre, from Laguiole. If you make it till the end, there’s a breakfast waiting as well.

There will be a second dance floor on the ground floor of the museum, while electronic music lovers have their own space — the coffee place in front of the pond, that will be transformed into a club for the occasion.

On the first floor of the museum a beach setting will be created with chairs, mats, towels, and also with fun gifts.

Tickets from R$550,00. You can buy them here: Ingresso Certo or at the Giuseppe Grill Restaurant – Av. Bartolomeu Miter, 370, Leblon. 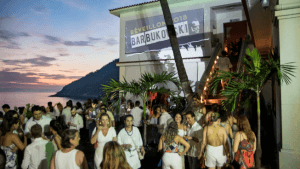 Bukowski Bar, well known hipster hang out in Botafogo, brings rock and roll to New Year’s Eve in Rio de Janeiro. The party will be held at military club next to Praia Vermelha, the Red Beach. At least two dance floors led by several DJs will keep partiers occupied. The main attraction is Brazilian singer Nando Reis. The opening band will be Black Circle, which will pay tribute to the North American grunge band Pearl Jam. There will be plenty of other activities as well, including the presence of fortune tellers, barbershops, a women’s space and a massage service.

Included in the price are open bar service and an extensive menu of drinks, entrees, dinner, various desserts and breakfast.

You can buy tickets on this website starting at R$530.

Azur, a seaside restaurant at Leblon Beach, will hold a New Year’s Eve party called Azur Pé na Areia. Run by chef Pedro de Artagão, the night will offer tasty dishes with seafood and sophisticated cocktails. On the drinks menu you will also find sparkling wine and beers, if you’re not up for cocktails. Various DJs and a show by Rodrigo Lampreia, paying homage to the city’s ancient dances, will be there for entertainment.

To avoid the masses on Copacabana Beach you can go to Copacabana Palace hotel, with great views of the beach. The hotel offers several New Year’s Eve packages. The opening of the party will begin at 8pm. Around midnight there will be a firework display overlooking Copacabana Beach and, from 1am on the pool area will have a dance floor to the sound of DJ Guga Weigert.

For hotel guests, the minimum package is four nights. Check-in can be made until the 29th and check-out starting from January the 1st and on. The package price is from R$18,072 (taxes not included) and valid for two people. Breakfast in the Pergula restaurant, located by the hotel’s swimming pool is part of the deal. 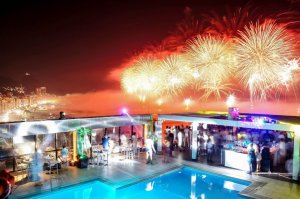 Located in front of Copacabana Beach, the Pestana Hotel will have three parties for the new year. The Rioveillon party can be attended by guests and visitors. At Rias Restaurant, located on the ground floor of the hotel, buffet and drinks will be served: the price for the tables inside the restaurant is R$850 and on the balcony R$950 per person.

You can also opt for Salão São Pedro da Aldeia. The lounge overlooking the sea will have plenty of cocktails, an open bar including national sparkling wine, and DJs throughout the night. Price starts at R$1,300 per person.

For the better views, take the elevator and go all the way up to the rooftop of the hotel, where you’ll find Deck Lounge Bar. Price starting at R$1,950. Reservation: 0800 7378262. Website: http://www.pestana.com/br