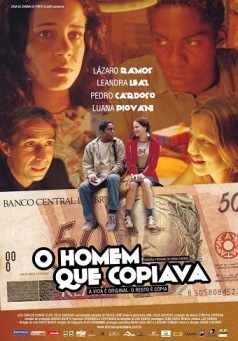 André (Lázaro Ramos) is a young 20-year-old man who works doing photocopy in a stationery located in Porto Alegre. André lives with his mother and has an ordinary life, basically living for his work, staying home and doing the same activities. André falls in love with Sílvia (Leandra Leal), his neighbor, who he observes using the binoculars from his room. Determined to get to know her better, André discovers that she works in a clothing store and, in order to get close to her, tries everything he can to earn 38 reais to buy a supposed gift for his mother. O Homem Que Copiava was launched in Brazil in 2003 and has won 18 awards. It is a comedy movie but it also presents a lot of drama and romance.

Dora (Fernanda Montenegro) writes letters to illiterates at Central do Brasil in Rio de Janeiro. Because the reports she hears and transcribes, we get to know a fascinating Brazil, a true panorama of the migrant population who tries to maintain ties with their relatives and their past. Ana is one of Dora’s clients. She comes to write a letter with her son, Josué (Vinícius de Oliveira), a nine-year-old boy who dreams of finding his father, whom never met. Ana suffers an accident in front of the station and dies, leaving Josué by himself. Even unwillingly, Dora ends up hosting the boy at her house and taking care of him, developing a friendly relationship with him. She ends up by taking Josué into the northeast of Brazil and they both go looking for his father. The movie was nominated for the 1999 Academy Awards for Best Actress and Best Foreign Language Film. 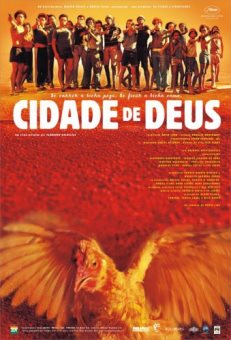 Buscapé (Alexandre Rodrigues) is a poor, black and very sensitive young man who grows up in the middle of a very violent environment. Buscapé lives at Cidade de Deus, a Rio de Janeiro favela known for being one of the most violent places in the city. Frightened by the possibility of becoming an outlaw, Buscapé ends up being saved from his fate because of his talent as a photographer, which allows him to pursue a career. It is through his look behind the camera that Buscapé analyzes the day-to-day life of the favela where he lives, where violence appears to be infinite. We also get to know Zé Pequeno – a sociopathic drug dealer who takes sadistic pleasure in killing his rivals since he is a kid – and Bené – Zé’s childhood friend and criminal, who dreams of living an honest life. 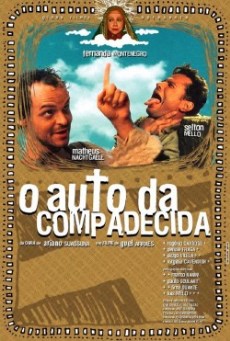 A 2000 comedy movie, based on the 1955 play called Auto da Compadecida by Ariano Suassuna. The movie tells the adventures of João Grilo (Matheus Natchergaele), a poor and lying country guy, and Chicó (Selton Mello), the biggest coward of men. They both fight for their daily food and living and go through several episodes deceiving everyone from the small village of Taperoá, in the backlands of Paraíba, northeast of Brazil. When they die, they are judged by the Devil, Jesus and the Virgin Mary. 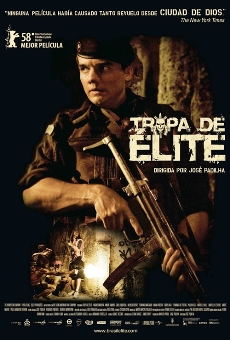 The movie shows the daily life of BOPE’s (Special Police Operations Battalion of the Rio de Janeiro Military Police) group of police officers and their captain (Wagner Moura), who wants to leave the corporation and try to find a replacement for his job before the Pope comes to Rio. At the same time, two childhood friends become policemen and stand out for honesty and honor in performing their duties, fighting against the corruption in the precinct they work. Its sequel, called Elite Squad: The Enemy Within, was released in Brazil in 2010. Between the two movies, they won 76 awards.

Have you already seen any of these?