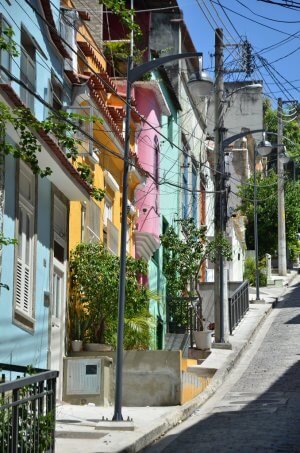 In the mood to step into one of Rio de Janeiro’s oldest neighborhoods? Go back in time and explore historic Rio, the buildings and alleys from Brazil’s colonial period at Morro da Conceição, located on a hill next to the well known Mauá square with its iconic Museum of Tomorrow. It is on this hill where the initial occupation of Rio de Janeiro at the end of the 16th century took another step. Nowadays Morro (which means ‘hill’) da Conceição is a small hidden pocket, with art studios, a hostel, some bars and a splendid restaurant.

When roaming around in this quarter, it does feel like walking in a Portuguese village, with its traditional Portuguese style houses and cobblestone streets. On weekends you’ll meet locals hanging outside small bars, drinking a cold beer, discussing the latest football match or political developments. It’s an oasis of peacefulness located in Rio’s bustling center. Just to get an idea: the city centers main artery, Avenida Branco, is only minutes away. 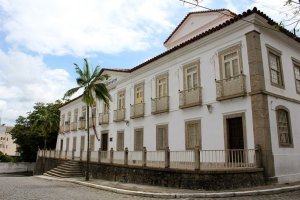 For history buffs, Morro da Conceição, obviously is a great destination. Standing out, on top of the hill, is the Conceição Fortress. This fort was built a strategic defense point after French privateers had invaded the region in 171, looking to get their hands on the famous Brazilwood. Today it is a monument that houses the 5th Army Survey Division. It is possible to visit the fortress, but that needs to be scheduled. It still has the dungeons, where political prisoners from the past were kept. A fascinating fort.

Another interesting site to explore is the so-called Hanging Garden of Valongo. Designed in 1906, the garden functions as a large leisure area with a nice view. The park is open to visitors daily from 10am to 6pm. The garden was designed to hide the troubled past of the slave trade in that area. At one point in the 19th century Rio had the biggest slave market of the Americas. In the garden you’ll also find a permanent exhibition of archaeological findings from the excavations close by, where the former docks of Valongo were located. On those docks many slaves passed by, setting foot on Brazilian soil for the first time, after an extremely hazardous journey by boat from Africa. Among the excavations archeologists found jars, cutlery and other things brought from Africa.

In need of a drink, or some food after checking out the different sites, or just tired from walking the hilly streets, pay a visit to Imaculada restaurant, 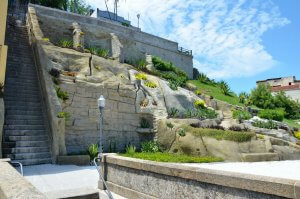 an excellent place for lunch, or just a drink. They always have art exhibitions going on, with paintings or framed pictures of local artists decorating the wall. They also serve craft beers and have great snacks. A favorite is a portion of fried little balls filled with rice and black beans, known as Bola Sete on the menu.

Morro da Conceição can be reached from Mauá square (praça Mauá). If you are walking, just take the stairs in Ladeira João Homem. The steps are easily recognized, because they are covered by a beautiful mosaic, done by a local artist-couple, who have their studio at the top of the stairs, next to the entrance to Conceição hill. Another entrance can be found at Pedra do Sal, location for one of the most famous street parties in Rio on Monday and Friday.