Mauá Square in Rio, back as one of the hotspots in town

The Maua Square in Rio is back as one of the hotspots in the city. And that is a good thing. For locals, and for visitors in Rio. Located in the port zone of Rio de Janeiro, Praça Mauá is an interesting square, and when exploring historic Rio, just a walking distance from one of the oldest neighborhoods of the city, Morro da Conceição. An area of around 25 thousand square meters, the Maua square in Rio is in a way defined by the futuristic Museum of Tomorrow, a 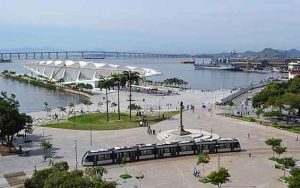 The place always was one of the most important areas in the old city of Rio, since it was the place where the ships arrived with all products. The square officially was inaugurated in the beginning of the twentieth century, commercial ships would dock there, bringing products and tourists to Rio de Janeiro. Soon the surrounding neighborhood developed into a busy area with bars, money changers, and brothels.

After the city Rio lost its status as capital of Brazil in 1960 downtown Rio, including the port zone, went through a period of decay. Especially in the evenings and weekends the area was to be avoided. However, because of the World Cup football in 2014 and the Olympic Games in 2016 the region around the square was revitalized. And the last couple of years the square has gained a lot of popularity due to events, congresses, parties and other social activities that took place on and around the square.

Nowadays the square is known for different reasons. Besides the museum of Tomorrow, there is also the Rio Art Museum, or MAR as it is called locally – two museums that definitely should be a part of your program with rain in Rio. MAR is an arts museum, with expositions related to the city of Rio de Janeiro. On different days you’ll find food trucks and alternative markets on the square, offering food, drinks, clothes and other stuff. 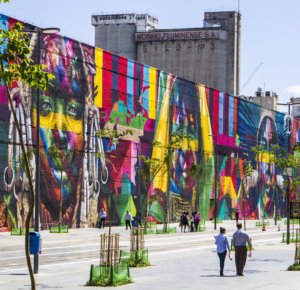 Near the Maua square in Rio, along the docks and their warehouses, incredible street art is to be found. One of the highlights is the work of Kobra, a spectacular 190-meter-long painted wall, presumably the largest street art mural ever made, known as the Wall of ethnicities. The mural comprises five faces from diverse ethnicities. You can see a Tajapo boy from Brazil, a Mursi woman from Ethiopia, a Supi man from Northern Europe, a Huli man from Papua New Guinea and a Kayin woman from Thailand.

If you are in front of Kobra’s work, it is also a short walk to AquaRio, the city’s aquarium. With about  26 thousand square-meters, and five floors and 28 tanks, it is the biggest aquarium in South America and worth visiting. Next to the aquarium you will find the cities newest attraction, the Rio Star. A 88 meter high ferris wheel. Also the biggest in Latin America.

Another great thing of the square is its views, of the Bay of Guanabara, and of the bridge of almost 14 kilometers that connects Rio de Janeiro to satellite city Niteroi. For a long time this connection with the bay was obstructed because of a huge viaduct, with one of the highways to the international airport and connecting to the highway to São Paulo. Around the Olympics this viaduct was blown up and this created the possibility to give Rio back its connection with the water.

The 10 best photographers in Rio to follow on InstagramBrazilian food - Manioc Root, or cassava, is a local favorite