Which favela in Rio de Janeiro you should visit?

This all is part of the so-called paradox of Rio de Janeiro. On one hand, you have the beautiful nature, gorgeous beaches and stunning views of arguably the most beautiful city in the world. On the other hand, there is enormous poverty, people living in difficult conditions, with daily drug and gang activity. Visiting a favela in Rio de Janeiro is high on the to-do list for a lot of people. Rightfully so, because favelas are an important part of the social structure in the city. But to visit which favela in Rio de Janeiro, that is the question. We have the answer. 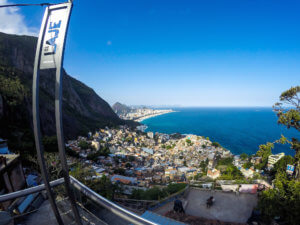 Vidigal is the most frequented favela in Rio de Janeiro. It is pretty big with around 40 thousand inhabitants, though the official number is around 15 thousand. This is the favela where most tourists go. First reason because of the great view over the neighborhoods of Leblon, Ipanema and the lake, secondly because of the hike to the top of the mountain, the Dois Irmãos. At an altitude of 533 meter, you will experience one of the best views in town, with most of the time few people at the top. In the weekends it can be pretty busy though, since lots of locals tend to go up as well. The hike also has great views of the biggest favela in the city, Rocinha. A drink at the famous Bar da Lage is obligated. Don’t expect a favela bar, since it is one of the most popular bars in the city. Hence the R$50 entrance fee, which is not really suited for the budget of the people in Vidigal. But the view is marvelous and they have some great parties during the weekends. 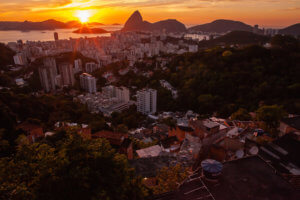 Probably the favela that people know the least about, it is the place where one of the most impressive pieces of art in Rio de Janeiro is located. The so-called Morrinho Project (Projeto Morrinho) is one of a kind and all done by the locals. Colored bricks form a kind of model of a favela, that all started twenty years ago by some kids that used to play scenes of their daily life. There is an impressive view over the city and a cool place to have lunch to enjoy the privileged view. The favela has two entrances, one at Laranjeiras neighborhood and one at the top, next to Santa Teresa. A visit to this favela will give you great inside about life in the favela. One of the most authentic experiences you can have.

The most famous favela in the city. As small neighborhood with around 4 thousand inhabitants. It is well-known for tourists because of Michael Jackson’s 1995 music video for the song They Don’t Really Care About Us. A year after the King of Pop died in 2009 the community put a statue of the singer on the square where the video was recorded. Several projects have been taken place in the favela to make it a more colorful place. Akzo company created a project that let two Dutch artists design a pattern for the square next to the samba school. The colorful houses and the typical favela environment make a visit a great experience. And on Sunday’s there is samba and a typical Brazilian feijoada at the Michael Jackson square.

This is one of the more unknown favelas among tourists. However it is a community with a well known name and history in Rio and Brazil. Mangueira is home to one of the best Samba schools in Rio and is the place where Samba legends like Cartola lived. This is why you can also find a Samba museum in the neighborhood. Mangueira is located next to the Maracanã football stadium. Where favelas like Vidigal saw an influx op Gringo’s and development after a pacification process in preparation of the 2014 World Cup and 2016 Olympic Games, this hasn’t been the case in Mangueira. And till recently there was hardly no tourism in Mangueira. We from GringoRio are the first to offer you a tour to this community in collaboration with Estrela da Favela. Estrela da Favela is an educational project that prepares children from the community for a brighter future. When you book this tour with us, your money will go to the social project.

Keep in mind that it is always best to not enter a favela in Rio de Janeiro without having knowledge of the situation inside the neighborhood. The four favelas mentioned above are safe and it would be really rare to encounter any kind of problem there, but just like outside the favelas – what in Rio de Janeiro is called the asfalto – sometimes things can change pretty quickly, especially with gangs and drug trafficking involved. So it is good to check beforehand and it’s better to enter a favela with a guide in our opinion. Not only for your safety, but also because a guide can provide you with the necessary information to really understand the history and daily life in the favela. Their are a lot of people offering favela tours and it can be hard to select a good one. That’s why we did the work for you and have contacts with professional and experienced guides in every mentioned favela. Besides that we selected guides that are related to a social project, so your money will also leave a positive impact on the community you are visiting. You can book your tour here.