Praça XV square in Rio is where it all began 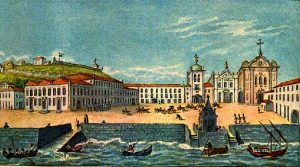 Interested in the history, in the epoch when Rio de Janeiro still was a Portuguese colony? Then you definitely should pay a visit the Praça XV square in Rio, also known as Praça XV de Novembro. Just take the metro to downtown Rio, get out at the Carioca station, and head by foot to the square. The so-called Orla Conde, a public promenade that borders Guanabara Bay, is next to Praça XV as well. From there on you can make a nice walk to Mauá square.

Without any doubt one of the oldest places in Rio, and still looks a lot like the version of the square in 1808, that you can see on the picture. Praça XV is a fun place to stop by. Facing the square from the road (on the other side is the bay) you’ll see impressive colonial buildings on your right hand sight. In one of them you’ll find Café & Gastronomia Arle­quim, a great place to grab a coffee, or buy a book. Looking further ahead you’ll see the water of the Bay of Guanabara Bay,and the dock from where the ferries leave to the city of Niteroi and other destinations.

Praça XV square in Rio as a port

During colonial rule the square was an important docking place, a location where visitors, immigrants arrived in Rio by ship. As the main embarkation and disembarkation port, it was there where dignitaries from Portugal and even the imperial family from Portugal, set for the first time foot in Rio de Janeiro. The imperial family lived for 13 years in Rio de Janeiro, from 1808 until 1821. 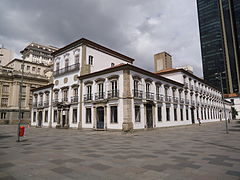 The largest existing building on Praça XV square in Rio is the Paço Imperial. It used to be, among other things, the former residence and headquarters of governors and viceroys. Also it was the first address of the Portuguese Court and later also the address of the Portuguese emperor D. João VI, his son D. Pedro I. Grandson D. Pedro II used it as his office.  From 1743 to 1889 the building was basically the political center of Brazil. In 1889 Brazil became a federative republic. The official full name of the square is Praça XV de Novembro, honoring the day that the proclamation of the Republic of Brazil took place. 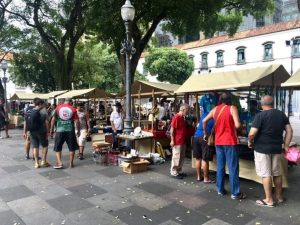 If you’re hungry, and you want to combine history with food, take a look at the left of the square. The so-called Arco do Teles, are to be found there, a sort of a gateway to a string of old buildings from colonial times, in narrow streets, where you’ll discover plenty of fun, traditional bars and cosy restaurants. In those streets you’ll also encounter the house where Carmen Miranda lived when she was young. She was a Brazilian-Portuguese Hollywood star in the beginning of the 20th century, who became extremely popular in the US and was famous for her fruit hats and samba dancing.

Brazilian food - Manioc Root, or cassava, is a local favoriteCoronavirus in Rio de Janeiro - what when it is over?