Boxing and Jiu-Jitsu in Rio – Some History, Info and Addresses

The history of Jiu-jitsu in Rio made short: Japanese judo wrestler Mitsuyo Maeda taught Carlos Gracie his style, he in his turn taught his younger brother Hélio. Together the two brothers opened the first school (Portuguese: academia) 1925 in São Paulo; Brazilian Jiu-jitsu was born. The sport evolved, first in Brazil where the Gracie family have dominated heavily, later in the world. Today you have several clubs in countries like Sweden and Belgium. The family moved from São Paulo to Rio and they are now based in the neighbourhood Barra de Tijuca.

There are loads of academias around. I have picked out a few from the official homepage of the Jiu-jitsu Organization in Rio FJJRIO that you can try to contact. Most of them are used to foreigners. The training is really hard, quite a few times I’ve met people coming from practice with a smile saying: “…today they beat the shit out of me again…” or “…I can hardly move…”. If you practice this sport you have to like a bit of pain and here in Rio de Janeiro there is plenty to get! 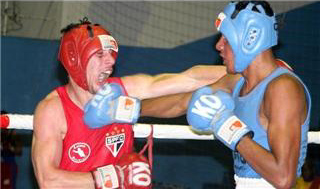 While jiu-jitsu attracts many boxing is less popular but there are some gyms around. The connection between boxing and helping kids in the favela is strong. A good example is the boxing project in the favela Vidigal run by former professional Latin American champion Raff Giglio. You can train or take classes there, here are the details:

Another club I got recommended from Norwegian Nina is Academia Rubens Dias (Olympico Club). It is located on
R. Pompeu Loureiro 116 in Copacabana map, tel 2547-5424.

Here is the link to the Facebook page of FBERJ (the official boxing federation in Rio). Through there you can probably find some more clubs.