Maracanã and Football Games in Rio

The connection between Brazil and football is really strong, the national arena Maracanã is famous around the world. Going to football games here is easy and fun, an ecstatic atmosphere compensates for perhaps some lack in quality. The growing commercialism in football has drained the Brazilian league of a lot of talent, almost all the best players play abroad, mostly in Europe. The national league start in May and end in December. January to April there are the prestigious State Championships to watch.

Going to Maracanã is best done by subway or on organized tours. The subway take you all the way to the stadium, if it’s a night game or a bigger game it could be a bit dodgy. You buy the tickets in front of the entrances, if there are no tickets left you will have to try to get them from one of the hawkers lurking about. The more expensive arquibancada are on the rafters and more fun since you that is where the fans are. Ticket prices vary depending on the game, they start at around 60R$.

Going organized is a convenient and safe option, the prices are not bad – operators offer this service in most hostels and hotels. Going to São Januário (the stadium of Vasco da Gama) or to Engenhão (the stadium of Botafogo) is recommended only in organized form since they are located in rough neighborhoods and public transport options are only buses or a sketchy train. 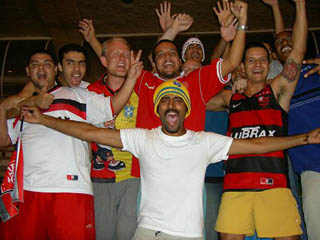 There are four big teams in Rio, most of them play all their bigger games at Maracanã since their own arenas are too small or too bad.

Flamengo
The biggest team in Brazil has a wide support, there are many supporters all around Brazil. The colours are red and black. There is no real connection between the neighborhood Flamengo and the team. A nickname for a Flamengo supporter is urubú (vulture in English). It is a team for the poor although many people from all social classes support the team. Had big success in the 1980’s when they were lead by superstar Zico.

Botafogo
The black and white team has less supporters but lots of tradition. In the 1960´s they dominated Brazilian football and there were no less then 9 players from Botafogo in the World Cup Champion squad of 1962, among them arguable Brazil’s most talented player of all time: Garrincha. The supporters of Botafogo are dedicated and you find many writers and other cultural professions on the rafters. Most supporters are over 60 years old.

Vasco da Gama
Also black and white Vasco is traditionally the team of Portuguese immigrants, it’s the second largest club in Rio. The rivalry with Flamengo is big and derbys with them many times result in fighting in the streets. Their all-time best player was the striker Roberto Dinamite who scored loads of goals during the 1970´s, these days he is in the organization. A nickname for a Vasco fan is bacalhau (English: cod) derived from the Portuguese tradition of eating dried cod.

Fluminense
Green, red and white, known as Tricolor is the traditional club of the wealthier. Rivellino is one of the greatest Fluminense players of all time. Just like with Flamengo most supporters are not living in Rio. Being supported by rich and powerful people they are jokingly more famous for their performances in court rather than on the field; Reportedly their skilled lawyers have wiggled them out of some relegations and other difficulties a few times. The charismatic striker Fred has been the star the last few years.