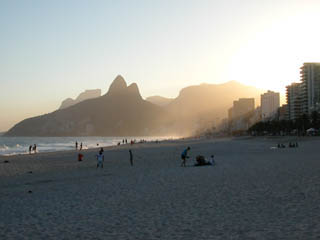 Most young travellers that go to Rio prefer Ipanema Beach; Why is that? I will try to explain this world famous beach to you, starting with a bit of history.

The first beach that really got famous in Rio was Copacabana, but at the same time people living in Ipanema started to go their own beach. The neighborhood is traditionally a wealthy one as opposed to Copacabana that has been dominated by the middle class. As a result the beach culture developed here was a bit more refined, albeit it was a place where criticism of the regime. In the 1970’s the pier (that was dismounted in the late 1980’s) became a hub for surfers and alternative ideas). During the military dictatorship Ipanema became some kind of an alternative stronghold for the opposition. Around Posto 9 (life guard tower 9) young leftist intellectuals and hippies smoked weed and exchanged opinions, closer to Posto 8 gay people were meeting and over in Arpoador you had the surfers.

Things have changed, there are more tourists and the politics are long gone. A recent surge in tourists have moved many locals more towards Posto 10. Just like in Copacabana sports is a dominant (if not even more dominant) feature. The percentage of perfect bodies around Posto 9 and 10 is really high. There is a open air free gym over at Praia de Diabo in Arpoador and there are volleyball courts and football fields all over. An important factor to why many people prefer Ipanema Beach to Copacabana is that there are less prostitutes, fewer scoundrels and more locals (although in Dec, Jan and Feb there are lots of tourists these days). The beach still has a curious and interesting division, starting from Arpoador: 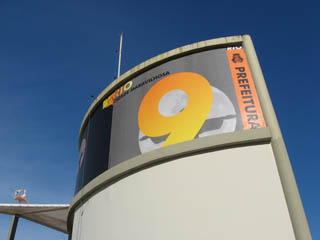 Arpoador – Posto 7 Since Arpoador has the best waves in the actual city of Rio this is of course where surfers hang out. But they share the space with many from the favelas Cantagalo and Pavão-Pavãozinho, it´s basically straight down for them. Quite few favela kids surf and there are rumours that there is quite a drug trade going on between the surfers. This is not a place for beginners; The surfing can be dangerous because of the proximity to the rocks- this together with crowded waves grants a pretty hostile atmosphere.

Posto 8 This is the most quiet part of Ipanema Beach, you have many families here.

Between Posto 8 and 9 This is the gay section. You can’t miss it, there are rainbow flags and Ken look-a-likes everywhere. During Carnival you have a huge crowd of gay people from all over the world here.

Posto 9 As everywhere else in the world politics came out of fashion and nowadays there is a young hip crowd that has no political engagement to talk about. More important is the colour of the bikini or what club to go to later. For most parts of the year the smell of pot can still be quite strong.

Posto 10 The really wealthy hang out here. You will find a lot of so called pitboys here, they are muscly young men with lego hair and a bad attitude.

The neighborhood is even more exclusive and expensive than Ipanema. But the beach is not the preferred hangout for many other than families. At the end of the day it gets covered in the shade from the big peaks Dois Irmãos. Also the water lots of times is dirty from the channel connecting to the lake. There is sometimes good waves close to the rocks on the right, then you have surfers there.