Barra Beach may not be so famous outside Brazil but for Brazilians it signifies wealth and a healthy life style. There is a stretch of no less then 18 km going all the way from the beginning of Barra de Tijuca until the end in Recreio. 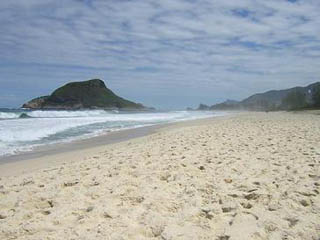 The Arrival of the Public

The mix of modernity, glamour and fame caught the eye of many people in Rio. On a normal weekend, much to the contempt of some people living here, the beach is nowadays full of people from Rio’s poorer areas. The highway Linha Amarela gives these people quick access to both Barra and Recreio. On weekdays you still have those healthy looking bodies with that air of wealth in a clear majority.

Where is What on Barra Beach?

Right in the beginning of Barra Beach you have many people from the favelas close by. Next comes the kite surfers, if you are interested in trying just walk up to them and ask, for sure there is someone there that can help you. Close from there you have Cabana do Pepe (English: Pepe’s Cabin).

Pepe was the pioneer hang glider in Rio, he tragically passed away during a hang gliding competition in Japan. Before he died he opened Cabana do Pepe. Here you can buy excellent natural sandwiches, açai and smoothies; it’s also a good spot to check out the locals since it’s one of their favourite hangouts. Pepe was in many ways a symbol for the new Rio generation that became adult in the 1980’s. Surfing champion, hang gliding champion. Restaurant pioneer with his sandwiches and also by opening Rio’s first Japanese restaurant Sushi Leblon (still considered one of the best in Brazil).

After Pepe’s the beach just continues. You pass a huge stretch that is part of a natural reserve. During weekdays you can be almost alone there, in the weekends it all fills up though. The beach changes over to Recreio and ends at a huge rock in the water called Pedra do Pontal, by locals often seen as the real end of Rio.

Barra Beach has a short history as a place for the public; That is beacuse the neighbourhood itself, Barra de Tijuca, only really got populated in the 1980’s. Wealthy people was attracted to the area because of luxurious condominiums, security and a healthy glamorous lifestyle. Many features from Zona Suls Copacabana and Ipanema quickly took root, especially anything sport related. Some of them was actually taken further such as healthy sandwiches, açai and adventure sports (like wind and kite surfing). Many rich and famous bought apartments here and can still be seen on the beach.

Surfing is pretty good both in Barra and in Recreio, read more about Surf in Rio de Janeiro in our Surf Guide Rio.