Santa Teresa – The Bohemian Neighbourhood on the Hill

Santa Teresa is for sure one of the highlights of Rio de Janeiro. The bohemian neighbourhood on the hill with its great views of the city is very different from other parts of Rio. Here’s some history and tips.

Named after a monastery the neighbourhood started to get constructed in the 18th century. Pretty son it attracted some wealthy families and big mansions were built. In 1872 the tram was inaugurated, in 1895 it started to run on the aqueduct from Largo Carioca. In the late 19th century it had become a favourite with the bohemians, artists loved the tranquil setting and not to forget that most were probably from the rich families living there. Until today not much has changed and if you are looking for a bank or a super market you won’t have much luck. The neighbourhood hasn’t changed almost anything the last 100 years, actually it goes for the people living there too. Here it’s still great fashion with big beards, paint stained clothes, a wild stare and smoking pipes; features on the art scene we haven’t seen since way before the Second World War. It has been said before but I’ll say it again: It’s like if the time has stood still here! 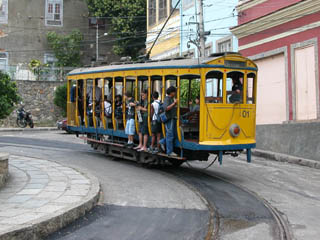 The “Bondinho” in Santa Teresa, currently not functioning.

Sights and Getting There

A good place to start is Largo de Guimarães which is kind of the center. Here you also have a tourist information where you can get good information about galleries, museums, sights and restaurants. I personally recommend two places to visit:

Parque das Ruinas (open everyday 10h/17h) on R. Murtinho Nobre 169 map, a 10 minute walk from Largo de Guimarães. The former home of one of the cultural personalities of Rio (Laurinda Santos Lobo) was abandoned in 1946. Today the city of Rio has made the ruins open for the public and various cultural events take place here. It’s well worth a visit just for the view!

Chacara do Céu The former home of businessman Raymundo Castro Maya offers not only great views of the city. He had dedicated his life to the finer arts as a supporter and collector and his house has now become a museum. The permanent exhibition features the founders personal collection with canvases by Picasso, Dali, and Miró and Brazilian painters like Portinari and Di Cavalcanti. The address is R. Murtinho Nobre 93 map, it´s open Tue-Sun 12h/17h, phone 2507-1932/2224-8981/2224-8524 to confirm. Site: Museu Chácara do Céu

There are many good restaurants with great views and cool interiors. The most famous is: 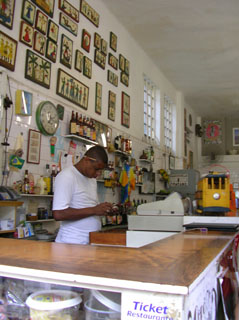 Another one with excellent food from the North East is:

There are many more, you can find some of them listed in my Restaurant section.

The tranquility of this neighbourhood is deceiving, walking around Largo de Guimarães is fine but since the winding maze of streets make it real easy to get lost and Santa Teresa is surrounded by many favelas (this is Wikipedias list of favelas here: Amigos de Santa Teresa, Francisco de Castro, Luiz Marcelino, Miguel Austragelésio, Parque Catete, Prazeres, Travessa Vista Alegre, Unidos de Santa Teresa, Vila Paraíso and Amigos do Vale), you better make sure you know where you are going and that it’s safe. Verify in the tourist information. If it’s late at night I recommend you to take a cab back home. Walking from Santa Teresa to Lapa at night is not to recommend, there are lots of gringos getting robbed doing just that.