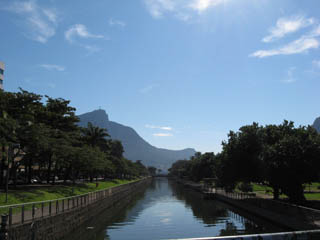 If you continue from Ipanema over the channel Jardim the Alah you will be in Leblon, the area continues until the foot of a two headed rock called Dois Irmãos (English: the Two Brothers). Here lives some of the more affluent citizens of Rio de Janeiro; restaurants and bars hold a high level of sophistication. In the north it borders to another neighbourhood called Gávea, other than its residential outline its famous for The Jockey Club and the big university PUC-Rio (Pontifícia Universidade Católica do Rio de Janeiro). The favela Rocinha has expanded so much that it now is right next to Gávea.

The name is from a French plantation owner called Le Blond. Just like Ipanema residential houses only started to get constructed in the early 20th century, before that it had plantations and actually a so called quilombo, a refuge for slaves, was in the area. It started out as a quiet area but slowly changed into a high status neighbourhood with high prices for real estate.

The beach here hasn´t got the same thriving beach culture you will find in Ipanema, here it’s more for families and residents that just want to relax. You get some surf towards the end so you have surfers there. The big thing in this area is luxurious boutiques, exclusive restaurants and designer bars. If you like the highlife, this is the place. There is a quite new shopping mall called Shopping Leblon that is located on Av. Afrânio de Melo Franco 290 map. The main shopping street is Av. Ataulfo Paiva and for food R. Dias Ferreira has many options.

In 1900 the area hadn’t been exploited