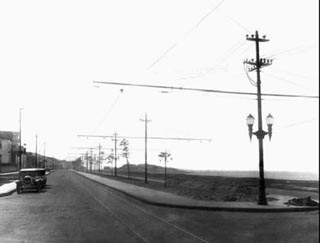 Ten years ago most tourists that went to Rio stayed in Copacabana, nowadays many prefer Ipanema. It’s more expensive but the beach is better, the water cleaner and it’s safer. The neighbourhood is beautifully wedged in between the lake and the Atlantic Ocean and just like in Copacabana you have big green hills surrounding.

There are a few misinterpretaions around it but this is the most probable. The neighbourhood got its name from José Antônio Moreira Filho who inherited the title Barão de Ipanema (Barão means baron) from his father. The word is Indian and means river that is no good for fishing but is not referring to anything in the area but to a river somewhere in the state of São Paulo were the father was from. The baron was owner of almost all the land in the area and a little more than a hundred years ago he started building roads and houses and the neighbourhood was founded. It got the name from him.

As I mentioned earlier the area just started to get populated little over a 100 years ago. It never received the population boom in the 1950’s and the 1960’s like Copacabana did. It quite quickly established itself as one of the posher areas in Rio. The connection to culture has always been strong, and many of the avantgarde gathered here during the dictatorship. The name itself got world famous in the 1950’s with the English interpretation of the song “Garota da Ipanema”, written by Tom Jobim and Vinicius de Moraes. Today most of the culture is gone and has been replaced by the worship of beauty, a strong gay scene and a laidback beach culture. Two favelas are in the area; Pavão (with Pavãozinho) and Cantagalo. 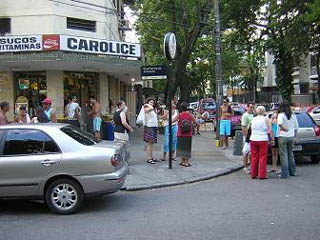 The first obvious choice is to go to the beach. Play volleyball, frescoball, surf, run, walk or just plainly sit down in a beach chair and let the day roll by.

Ipanema Beach is quite interestingly divided into informal sections. On Posto 7 (Posto is referring to the numbered lifeguard towers along the beach) you have the surfers and the favela, Posto 8 is families, between Posto 8 and 9 is the gay section, Posto 9 is for the young and hip, Posto 10 is for the rich… make your choice. Shopping is another good pastime since along the main street Rua Visconde de Pirajá you have a really good selection of shops for clothes, shoes, surfing, beauty and so on. It´s just like in Copacabana, just more exclusive and more expensive. Going down to Lagoa (The Lake) is another option. There you can run, bicycle or just stroll, there are also pedal boats for hire. Quite a few good restaurants, bars and nightclubs are located around the lake.