Copacabana – The Little Princess of the Sea 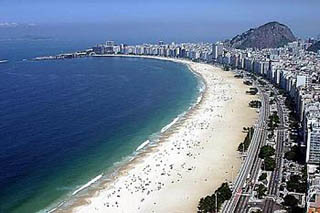 The beautiful bend of Copacabana Beach is known all around the world and the name provokes images of beauty, sand and ocean. That was once very true but today it’s a little bit different. The nickname A Princesinha do Mar is not as appropriate since its innocense is lost.

This is a somewhat complicated matter. The word is from Indian language but it is not certain what it signifies. The origin is easier; By the lake Titicaca in Bolivia there is a small town called just that. Legend has it: A long time ago Our Lady Mary showed herself for a young fisherman in an apparation. To honour her he sculpted an image of her and that became known as Nossa Senhora de Copacabana. Being the protector of the waters many Spanish ships leaving Peru and Bolivia brought copies of that image. One of those ships ended up in Rio and when some Spanish sailors founded a church they gave the same name as that holy image that had protected them on their journey (it’s not there anymore, they tore it down and built a big fort in its place). The neighbourhood at that time was called Sacopenapã but soon it started to be called Copacabana after the church. 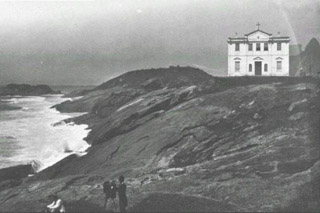 The church before they tore it down

It was only in the early 20th century the neighbourhood really started to get populated. With the inauguration of the tunnel to Botafogo access to the city center, where most jobs and commerce was, was made easy. The population grew steadily. The opening of the luxury hotel Copacabana Palace started to attract Hollywood celebrities, everyone wanted to live like the stars and in the late 1960’s the place got crammed. Favelas started to grow and the film stars stopped coming. Today it’s a middle class neighbourhood but there are quite a few exclusive areas. All those people that moved in in the 1950’s and the 1960’s are now old and therefor the citizens have a high average age. 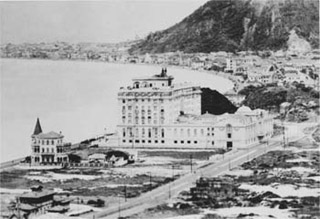 The famous hotel before it all began

Here you have stores, malls, restaurants, hotels, bars, nightclubs, the main commercial street is Av. Nossa Senhora de Copacabana. There are many tourists and the beach is crowded with foreigners, working girls and old people. The water in the ocean is unfortunately not always clean. On the street you get hassled by street kids asking for money, scoundrel/shoeshiners trying to shaft you, well it’s a real mix of everything. There are 4 favelas; Pavão-Pavãozinho, Cantagalo, Cabritos e Ladeira dos Tabajaras. The area still has its charm and there are many that prefer the multitude and the grit before the shallow superficial life style in Barra de Tijuca and Ipanema. At night when the lights are lit the famous beach crescent is still fantastic and having a Caipirinha on the beach walk is a treat. The little princess is not so little anymore, her clothes are a bit ragged but she is still a princess!

On the same strip of beach, at the eastern end is a small neighbourhood called Leme. It’s quiet has some shops and is almost purely residential. There are two favelas here: Babilônia and Chapéu Mangueira.