Caipirinha and Other Popular Drinks in Rio de Janeiro

The drink Caipirinha is world famous. I will explain to you how to make a good one on this page. I will also explain what other alcoholic drinks that can be appreciated. Let’s start with the classic. 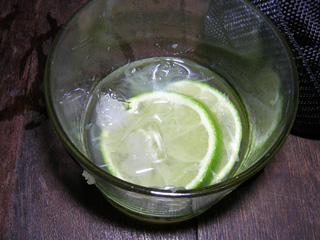 I will first present you to a classic recipe:

– 5 cl cachaça (sugarcane alcohol)
– 1 soft lime
– 1 – 1 1/2 tbsp sugar (from sugarcane)
– crushed ice
Roll and cut the lime in 1 cm pieces and remove the bitter white stalk and the two caps, put them in a large whisky glass. Add the sugar and crush the pieces of lime with a pestle just so much that you get the lime juice out. Fill the glass with crushed ice and top up with cachaça. Stir hard for a few seconds and then serve it with a straw. If you have to substitute the cachaça it’s best done with white rum (it technically then becomes a Caipiríssima) or vodka (Caipiroska) Other types of sugar changes the dimensions a little bit but works fine.

The type of cachaça used changes the drink completely, traditionally you use the industrial varieties like 51, Ypioca or Velho Barreiro. More exclusive brands, like the aged from Minas Gerais, makes it a different drink (in some peoples view more sophisticated). Now it’s time for my own recipe for a Caipirinha if you want to try it. It’s smoother and has more lime juice than lime peel taste.

– 5 cl cachaça (I actually prefer vodka in this one)
– 1 soft lime
– 1 – 1 1/2 tbsp sugar
– crushed ice and a few icecubes
Roll and remove 90% of the peel from the lime as well as the caps. Cut it in pieces and remove the white stalk. Crush it in a shaker together with the sugar with a pestle, add half a glass of crushed ice and shake it well. Add the alcohol and another half a glass of crushed ice. Shake again. Put one or two icecubes in a glass and pour the drink in to it. Serve it with a straw.

In the above recipes you can replace the lime with other fresh fruits, then you get a Caipifruta. The amount of fruit and sugar varies with the sweetness and flavour of the fruit. It’s common to use strawberry, kiwi, passion fruit and pineapple. An interesting version of this is to prepare it with saké and kiwi.

Batida means shaken in Portuguese and it’s just like the name; The ingredients are shaken together. What’s in it vary but it’s vodka or cachaça with fruit juice, sugar and sometimes condensed milk and/or coconut milk. Common fruit juices are strawberry, passion fruit and mango.

Beer is really popular in Rio. The hot climate has created a light beer that is best served really cold. Traditionally you drink it as draught beer chope in glasses. In more cheaper establishments you have 600 or 1000 ml bottles you share between your friends in small glasses. On the beach or at street parties you have cans sold from styrofoam ice coolers. For chope the most common brand is Brahma. Bottled or canned the more exclusive are Cerpa and Bohemia; standard is Antartica, Skol, Brahma and Itaipava; examples are Crystal, Lokal, Cintra and Bavaria. In the stores you have varieties like dark beer, sweet malt beer and weissbier. Imported beer is without exception really expensive. Over the last few years several good micro breweries has sprung to life, particularly in the South of Brazil where you have a strong connection to Germany. I personally would recommend Colorado Índica.

In the Caipirinha section above I mention cachaça, it is the national alcohol of Brazil and is made from sugarcane. It can also be called pinga or aguardente but is essentially the same thing. The most common brands are produced industrially (I mentioned some brands above) while you have cachaça artesanal which is produced locally. The later is suitable for ageing; If you do that you get cachaça envelhecida (aged), a good bottle of that can cost 300 U$.

Brazil has actually a few pretty good vineyards nowadays. Except for one producer who is based in Pernambuco all the others are in the South of Brazil. It is mainly red wine that is produced but there are also some white and sparkling wines. If you are interested in a good red wine to try I´d recommend Miolo Reserva Pinot Noir, a relly good sparkling wine is Chandon. In all honesty though, you are better off buying Argentinian or Chilean if you compare quality with price. If you want to know where to buy wine and alcohol in Rio just click here and you’ll be taken to my page about that.