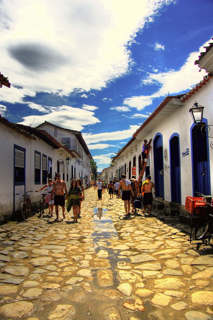 Parati (also Paraty) is one of the top tourist destinations of Brazil. Hundreds of thousands visit every year to walk the cobble-stoned streets and marvel at the almost untouched colonial architecture.

Discovered by the Portuguese in the early 16th century not much happened in Parati until in the 17th century. That’s when it was decided that all merchandise shipped to Portugal would pass through the state of Rio de Janeiro. Huge finds of gold in the mines of Minas Gerais led to soaring tax incomes, the town quickly expanded with the new wealth. It was during this periods most of the houses you can see today were built.

With mines running dry of gold in the late 18th century the importance of Paraty diminished. A lucrative slave trade continued, labour was needed for the ever growing coffee plantations. When that ended so did Parati´s importance. Production of cachaça, the Brazilian sugarcane destillat, grew considerably – At one point there were over 150 distilleries in the area and it was the most important product together with coffee. Today you only have a small production from a few producers.

In the mid 1900’s a road was built that connected Parati with São Paulo and it was like it had been discovered again, what attracted was the almost untouched architecture and the beautiful nature surrounding the town. In 1973 tourism took another great leap when the highway Rio de Janeiro-Santos was inaugurated. Ever since a steady stream of tourist have made their way here.

First and foremost has to be mentioned the architecture – You have old colonial buildings, beautiful churches and the crudely paved streets. One of the more famous occurences is the flooding of the streets – Portuguese engineers deliberately constructed Paraty so that the high tide could enter the streets at full moon, thus cleaning them taking the garbage out to sea. Next on the list is culture and food – Stores selling arts and handicraft, rustic restaurants and bars with live music are everywhere. On top of that you have some quite renown events taking place every year. The most famous is Festa Literária Internacional de Parati (FLIP) which is an international literature festival held every year in July and/or August. There are plenty of others, follow this link to get to a calendar where you can find out what, where and when.

Paraty seen from the sea

Another great thing with Parati is the outdoor activities available. Plenty of waterfalls, beautiful jungle and tropical beaches. All of these are reachable on different organized tours, either by boat or on wheels. A personal tip is to go horseback riding – you will be taken on trails past rivers, waterfalls, farms and through dense jungle. You also have diving schools, calm and clear conditions make it an excellent learning ground. The best way to decide on what to do is to visit an agency. If you go to Paraty.com you will find a list with some of the bigger agencies in town.

Options are many, most range from affordable to quite expensive. The places that are not in the historical center tend to be cheaper. Most likely you will be approached at the bus statio. Reserving is absolutely necessary official holidays and late December until late February – these times expect higher prices as well.

The company is called Costa Verde, the duration of the trip is about 4 hours. Click Costa Verde and you will come to their site. Info on how to get to and from the bus station in Rio you get by clicking this link.