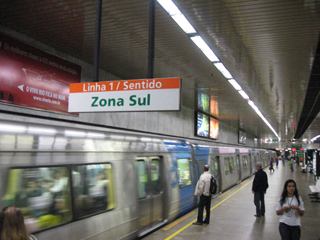 The subway, or ‘Metro’, is clean, fast and safe.

The subway in Rio (Portuguese: Metrô) is a really safe way to travel. It runs 7 days a week. Monday-Saturday 5h/00h and Sunday and holidays 7h/23h. It is quite reliable but due to insufficent maintenance stops are getting more and more common. It is limited to only two lines currently, the end stations are General Osório in Ipanema, Uruguai in Tijuca and Pavuna in Zona Norte.

Catching the Subway in Rio

For the regular Metro just buy a ticket for 3.70 R$ one way (unitário). Catching the Metroónibus (English: subway shuttle bus) is possible at only a few stops. A sign with the text and a tidy cue of people marks the spot. Make sure you keep the ticket you will get, it will grant you entrance to the actual subway. If you are going to a destination that is on the route of the Metroónibus make sure that you get the right ticket, otherwise it won’t be valid on the bus. In the subway stations you can buy subway passes that are easy to recharge with cash, they don’t give you a discount but you don’t have to stand in line every time you are going somewhere.

There are a few projects planned and already on the way for the subway in Rio. Some of the more interesting ones are:
Linha 4 Constructions have started to extend the Metro from General Osório to Barra de Tijuca, the new end station will be called Jardim Oceânico. This is partly built for the needs of the Olympics in 2016.
Linha 3 To connect Rio with Niterói would be a great relief for the heavily trafficked bridge. The most plausable (in my view) is a tunnel starting in Parque do Flamengo.
Rodoviária connection It is quite incredible that the main bus station in Rio has no direct connection with the subway. Reasons why can be discussed, many Cariocas I know have suggested strong lobbying from the owners of the bus companies have prevented this. The latest proposition I heard of was a mono rail connecting it with the Metro. Personally I’d just like to see a proper integration, that seems more like something a metropolitan city should have.

Here is a map of the Metrô: 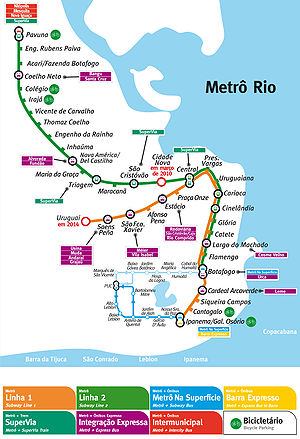