The greatest spectacle on earth – that is what we like to believe that the carnival parade in Rio in the Sambódromo is. Every year the samba schools take their show to the Sambódromo da Marquês de Sapucaí, the sambódromo of Rio – or just Sapucaí for intimates. It is nothing more than an avenue dedicated to samba, but during carnival it is filled with over 80 thousand people. Experiencing this will give you goosebumps. So many people, so much energy and so much passion. It is pure magic what is happening in Sapucaí. 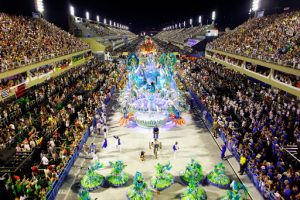 During 360 days of the year, Sapucaí barely has anything going on. But there are 5 days when Sapucaí turns to be the hottest place in Rio. When it is time for carnival, the Sambódromo fun starts on Friday with the parades of the Access Group. It is a second division of samba schools with bit less elaborated parades, but still, very exciting. This access group parades on Saturday as well. On Sunday and Monday the samba first division takes the floor and for two days they present what cariocas know as the best parades. Each year the samba schools in Rio raise the bar with innovative and very creative parades.

Each parade starts with the front commission, the first groups of the school giving a taste of what is to come. You have to imagine that at least around 3000 people join the parade, per samba school. And for the big schools this number goes up to around 7000 people. The parade continues with impressive cars filed with characterized people and groups on the ground – all coordinated to tell a story. Some of the most expected parts of the parade are the mestre salas and porta bandeira – couples dancing while carrying the samba school flag, the baianas, which are usually elderly women whirling in bulky dresses and, of course, the drums.

Although very entertaining, bear in mind that it is a competition. On Wednesday, the last day of carnival, a group of jurors gathers to open the score of each required feature of the parade and the big champion is revealed – and, thus, we have the fifth day of Sapucaí’s glory: the champions parade on the following Saturday.

For enjoying the Sambódromo, you can just watch the parades. Or, you can participate in them. Both ways separately are great, but the best way is to combine both. The actual time taking part on the parade is around half an hour. And then there is the waiting part. When you arrive you’ll meet other participants, you will take your place on one of the cars and slowly everything is made in order for the big climax. Make sure to enjoy every part of this experience, because you are part of one of the most cultural events in Brazil you will ever find. And to continue with this great event, make sure you have a spot in the Sapucaí to watch the parades when you are not in it. 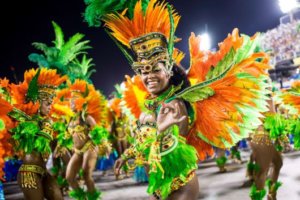 The costumes are one of the most important things during the carnival parade in Rio. Schools work the whole year to prepare the costumes, which are all hand-made, according to the theme of the school. To participate in a parade, you will need one of those costumes. The ones on the Access Group parades are more affordable than those of the Special Group. Prices are around 400 to 700 reais. In the Special group this goes up to 2000 reais, for popular samba schools in Rio like Mangueira or Portela. This is why many people opts to parade with one of the schools of the Access Group.

One last advice to enjoy this part of carnival in Rio the best way possible is to keep your costume and stay tuned on Wednesday to know who the big champions of carnival are. Everyone who participated in the parades of the winners, is invited to return on Saturday to celebrate it.

If you want to join the carnival parade in Rio this year, then you are lucky, because that is still possible. We have some costumes available, so check out our blog about participating in the parade for more info.