Rules when on the beach in Rio – Biscoito Globo & Mate

It is not easy to find one thing that is loved by all Cariocas. The beach is something most Cariocas love, but there are quite a few who prefer to visit the parks in Rio. Not even Flamengo, which is a Carioca football team and the most popular club in Brazil, is unanimously loved. But there are two things that all Cariocas are really crazy about, Biscoito Globo and mate de galão. 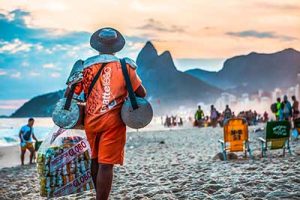 Biscoito Globo is a manioc-flour-based snack heavily sold on the beaches of Rio. It is very light and crunchy, sold in both sweet and salty flavors. Although the sweet version it is not very sweet and the salty version not really salty.

The guys walking along the beach selling Biscoito Globo often sell mate de galão as well. Mate de galão is a cold herb tea, massively sold on the beach in gallons carried by the sellers. They usually carries two gallons, one with the tea and the other with lemon juice, so you can choose the proportion of each you want.

The mate is usually sweet (this time, it is sweet indeed). A perfect combination with Biscoito Globo, when you are enjoying the beach for hours and start feeling hungry. They will give you a little more time to appreciate the beach before you leave to have a proper meal. Maybe this is why we love them so much.

How to offend a Carioca 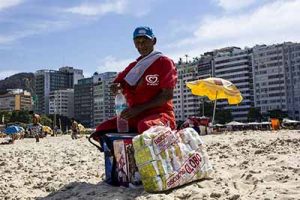 During the Olympic Games in Rio de Janeiro, an American journalist wrote an article with a bad review about Biscoito Globo. Cariocas reacted fiercely. Everybody felt like somebody was talking bad about his best friend. Since the 50’s Biscoito Globo is part of every memory we have on the beach. Memories of long days playing in the sand, bathing in the sea and having a biscoito together with mate.

Saying that the Biscoito Globo or the mate de galão is not good is equivalent of saying that your grandmother’s traditional cake is not tasty. You just don’t do it. It’s like cursing in the church. So now you know: when in Rio, don’t talk bad about these things!

Speaking of Flamengo, it is considered the club with the highest number of supporters in the world. It has over 40 million supporters. When someone brags about doing something that everybody does, Cariocas tend to sarcastically answer: ‘Oh yes, you and all Flamengo supporters’.

So have a Biscoito Globo and a mate de galão on the beach in Rio. It will be you and all Flamengo supporters.