Live music in Rio is an essential part of nightlife in this city. It’s everywhere; In the cornerbar, on the beach or in the live clubs. It’s easy to say that Samba is in the soul of this city. A sure way to experience live music in Rio de Janeiro is to go to a Samba club; They are mostly found in Lapa, but you find them in other neighbourhoods too. A few of my greater experiences in life have been in these places, some nights are just magic! Further down I have listed some places I recommend for Samba, live Jazz and Forró.

The Styles
When I use the word Samba I mean the form of it that couples can dance to, it’s not to be confused with the powerful Carnival Samba. Chorinho is a slower and the precursor, you could say the roots, to what mostly is played in the live clubs today. Pagode and Samba do Raíz are related. Forró is from the Northeast of the country and became really popular with young people a few years ago, easy to dance too and lot’s of fun. Bailefunk/Favela funk is a music style born in the shanty towns of Rio; A DJ, dirty lyrics and extremely suggestive dance moves have upset moralists and attracted the young, has been quite recognized internationally.

Rio Scenarium
Open: Tue-Thu 18:30h/2h Fri, Sat 18:30h/4h
Comments: Live club in great setting, 3 floors full of antiques and curiousities. Book a table for the ground floor. On weekends the 2nd floor has a DJ playing. Is the house with live music in Rio de Janeiro that has grown most in popularity (and price) the last years.
Music Style: Samba and Chorinho but also other, check site
Food: Brazilian
Dresscode: Casual
How much money to bring?: 50R$-100R$
Address: R. do Lavradio 20, Lapa map
Phone: 3147-9013(reservations)/3147-9005(information)
Site: Rio Scenarium 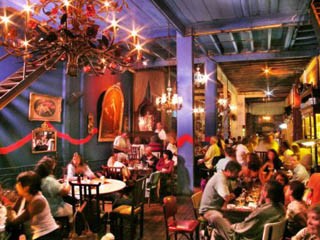 Lapa 40 Graus
Open: Everyday from 18h
Comments: Huge. On the first and second floors there are pool tables. On the third a stage and a dance floor where many times live music is performed. Beautiful place.
Music Style: Samba and Chorinho but also other, check site
Food: Brazilian
Dresscode: Casual
How much money to bring?: 50R$-100R$
Address: R. do Riachuelo 97, Lapa map
Phone: 3970-1338
Site: Lapa 40 Graus

The Maze (Casa do Bob)
Open: Every first Friday of the month from 20h, check the link to make sure!
Comments: This is a one of a kind place located in the middle of a favela. Spectacular views from the top of a favela in Catete. There is always live jazz. The owner, artist/original Bob with roots in England gives this place a unique atmosphere. Live music in Rio de Janeiro together with an incredible ambience.
Music Style: Jazz
Food: Snack food, could be kebab or falafel
Dresscode: No
How much money to bring?: 30R$-70R$
Address: R. Tavarez Bastos 414, casa 66, Catete map. When you get to the bottom of the favela Torto, just ask for “Casa do Bob”. You can either go by cab, if the driver is reluctant to go up just take a motorcycle taxi.
Phone: 2558-5547
Site: The Maze – Casa do Bob

Trapiche Gamboa
Open: Tue, Wed from 19 Thu from 20:30h Fri, Sat from 22h
Comments: Located in the part of town where samba was born. If you want to hear some live music in Rio de Janeiro in a completely local way, this is a sure bet.
Music Style: Samba and Chorinho
Food: Brazilian
Dresscode: Casual
How much money to bring?: 40R$-80R$
Address: R. Sacadura Cabral 155, Gamboa map
Phone: 2516-0868
Site: Trapiche Gamboa

Clube do Democráticos
Open: Wed-Sat from 23h
Comments: A beautiful building in Lapa houses one of the more popular dancing places in town. Crowds around 1AM, great place to get some serious couple dancing done.
Music Style: Wed Forró Thu-Sat Other
Food: Some
Dresscode: Casual
How much money to bring?: 30R$-60R$
Address: R. do Riachuelo 91, Lapa map
Phone: 2252-4611
Site: Clube dos Democráticos

Bip Bip
Open: Tue from 21:30h and Sun from 20h, other days too but not always.
Comments: A little Samba-Chorinho jam bar. Owner Alfredinho sometimes breaks out in fits of disgust with the uneducated crowds that dare talk loud during the performances. Very simple bar and good music.
Music Style: Samba-Chorinho
Food: No
Dresscode: Casual
How much money to bring?: 0R$-25R$
Address: R. Almirante Gonçalves 50, Copacabana map
Phone: 2224-9358 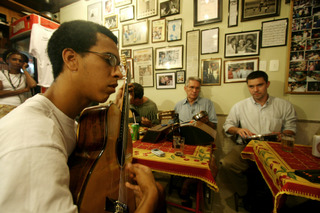