Bohemian Santa Teresa in Rio is a must visit

Bohemian Santa Teresa in Rio is one of those neighborhoods you don’t want to miss. Located on a hill, with typical Portuguese houses and French style mansions, full with ateliers, little studios and quirky shops, and excellent restaurants.

The neighborhood was originally constructed around the convent of Santa Teresa, during the eighteenth century. Initially, the quarter was occupied by wealthy people, who built mansions inspired by the French architecture of the epoch. Many of those charming villas are still to be seen in Santa Teresa, which makes the neighborhood such a great location to visit. 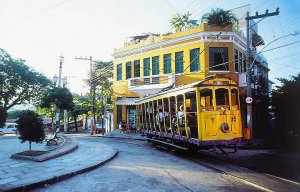 Close to the center of Rio de Janeiro, the neighborhood in the past became a refuge for people fleeing from the populated downtown area, among other things trying to escape from a yellow fever epidemic.

Santa Teresa will be always associated with its famous streetcar, that started running in 1872 for the first time and still runs today. In 2011 a tragic accident with the streetcar, which left around 57 people injured and killed 5, caused a temporary end of its functioning, while returning to action several years later.

Nowadays Santa Teresa in Rio is seen as a locality where intellectuals, artists, writers and academics reside. Among the famous and historic residents are musician Pixinguinha and Carmen Miranda, the singer and dancer who made it to Hollywood in the beginning of last century. It’s also a place with lots of boutique hotels, with great views. Because that’s one the other attractions of this neighborhood, the views of Rio’s bay area are beautiful from there.

If you’re lucky you might find yourself visiting when the annual artist event takes place, and studios, ateliers and exposition spaces open their doors for the public. Life music will be heard around the neighborhood and artists will surprise visitors with intervention art along the way. 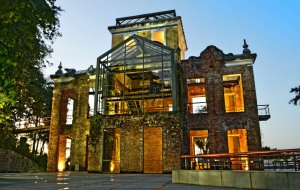 Known as Parque das Ruínas, Santa Teresa’s municipal public park is well worth a visit. The park  is a property with the ruins of an old mansion. It belonged to Laurinda Santos, a patron who in the beginning of the 20th century would call artists and intellectuals for social gatherings, poetry readings and dance. The mansion is now being used as a cultural center, hosting a nice coffee shop, also showing exhibitions. Another good reason to visit the place: it has a great viewpoint, on top of the old mansion, with breathtaking views of Guanabara Bay and Rio de Janeiro.

Next to the park you’ll find a small, but interesting museum, Museu da Chácara do Céu. It’s collection belongs to Brazilian entrepreneur Raymundo Ottoni de Castro Mayo, who died in 1968. The museum offers art from the first half of the 20th century and the 19th century, and has, among other pieces, about 500 paintings of the French artist Jean-Baptiste Debret. Debret is famous for his depiction of 19th century streetlife in Rio, with many paintings featuring slaves and their difficult circumstances as well.

However, if you’re looking for just a good time, great food and cold drinks, Santa Teresa has plenty to offer. Just a last tip from us for those who would like to eat something different: check out Espirito Santa. Run by chef Natacha Fink, this restaurant uses ingredients from the Amazon for its dishes, The menu offers typical Brazilian meat dishes, but also doesn’t shy away from Asian style options for vegetarians. The place itself, by the way, has a real chill vibe to it.

How to get there?

The easiest way to go to Santa Teresa is by Uber. The coolest way is to take the famous streetcar we mentioned before. Read more about this old tram here. Another way during day time is to walk up the famous stairs of Selarón. From the top of this Rio highlight it is only 200 meters more uphill until you reach Santa Teresa’s main street.