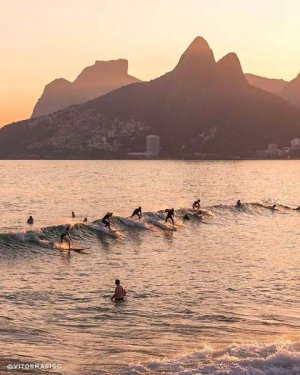 Surfing in Rio de Janeiro is a huge part of the culture in the city. To surf in Rio de Janeiro is just a brilliant way of experiencing the city and the local laid-back vibe. Brazilian surfers have a reputation around the world as being aggressive and rude in the water…. they have a reason. This is because there are so many people that surf in Brazil, they almost have to fight for every wave! And in a city like Rio, it is even worse. But this is not to say that you still can’t score some brilliant waves, with some brilliant scenery with some amazing people.

Getting around surfing in Rio is fairly simple, a lot of the beaches are real easy to access. Copacabana, Leme, Arpoador, Ipanema and Leblon are all located in touristic South ZOne, where you are most likely to stay. If you are a surfer, staying in either Copacabana, Ipanema or Leblon gives you straight access to the beach. In this article we will focus on surfing in the city, but the best breaks are not in the South Zone though. They are located quite far away. If you want to go to these places, it is best you find a local to go with you. These places are not easy to find and you will have to go by bus or rent a car. 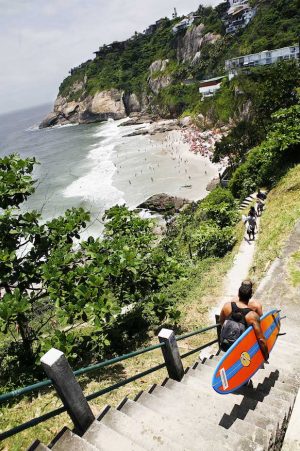 Surf in Rio de Janeiro – where to go

Ipanema has several good options to surf, but where exactly depends on the day. The beach has various breaks, so walk up and down to see where are the best waves. Have a good look and get stuck in. One important reminder: be careful for the gorgeous views the beach has to offer. Even the best surfer will miss his wave in Ipanema.

As a consequence of the high density of surfers on every wave the attitude can be quite hostile, especially towards outsiders and fights are not to uncommon. Around Arpoador, reputation has it that there is a connection to the drug trade going on in the favela nearby, it is really tense and it is not a place for beginners.

This beach is on the opposite side of the rock of Arpoador, and its beach. The waves are good, left and right, and normally this beach is less crowded than its bigger brother on the other side of the rock. It is not called the Devil’s beach for nothing, you have to be  careful of the currents, that can be really strong. Pay good attention to the situation that day, and maybe consult some other surfers to check for latest updates.

Leblon is not really known for its great waves. This beach is more for to see and to be seen. The good thing is that this leaves the beach more quiet and less tense. The part of the beach that comes right after the canal, separating the neighborhoods Ipanema and Leblon, is your best bet. There is a good vibe and you can find a wicked right hander with the right waves.

Copacabana is not really known for its surf options. Stand up paddle is the most popular thing to do at this famous beach. But that has nothing to do with surf. On the left side of the Copacabana beach, what is called Leme, you have some waves going left. Near the rocks you can get some short waves, but mainly suitable for bodyboarders. Not surfing either.

A beautiful place to surf. The waves aren’t high, but they are good enough to enjoy some good surfing. Left and right waves available and especially during the week you will find almost no crowd. In the weekend it way more busy, and since the beach is really small, it gets crowded very fast. You have to arrive early, because the high water will block the way to the beach when it is getting later in the afternoon. 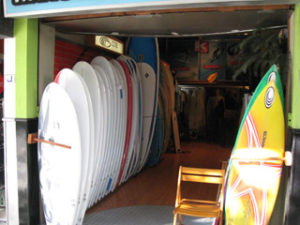 For board shops in Rio the best place to go is Macumba. There you have a couple of surf shops that have the cheapest deals around. They will certainly put the Zona Sul shops to shame, but it is very difficult to find them and if you don’t speak a little Portuguese then it’s even hard to buy from them. You can find the addresses on this site: Board Shapers in Brazil that has many of them listed.

Located in Arpoador, Rua Francisco Otaviano 67 map there is a small mall called Galeria River that has some surf shops. It’s a great place to get in contact with the locals. They speak English, and you can get all the info you need about surfing and other technical stuff you might want to know. Prices here are a little more than what you would expect. Sometimes they also rent boards here. On the beach in Barra de Tijuca they always rent out (close to Quiosque do Pepe is a safe bet). Around the state just keep your eyes open or ask around. 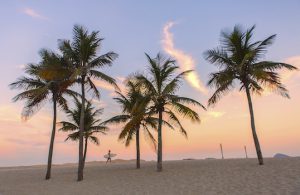 Surf in Rio – The History

The first surfers in Brazil started out on the beaches in Santos in the 1930’s but it was in Rio it really took off. People started to surf the waves in Rio de Janeiro during the 1940’s. This was mainly around Arpoador and the now removed Pier. In the beginning you couldn’t really talk about a pure surf culture, it was more part of a rising beach culture. In the 1960’s, like all over the world, surfing established itself as a culture on its own. Long hair, freedom, rock and pop all fit into the new ideas of the time. The persecution by the police, then controlled by a dictatorship government, also gave surfing an air of belonging to the free Brazil.