The people you see playing beach volley in Rio are in general pretty good. The many beaches and the good weather are two explanations that grants plenty of practice opportunities. The sport started in the US in the 1920’s, it became a common sight in Rio with an emerging beach culture in the 1950’s. The lust to hit the ball with the feet was too big and in the 1960’s footvolley was born. It is generally considered to have been football players practising on Copacabana Beach that started this so it’s actually a genuine sport from Rio de Janeiro. Where can you play it then? 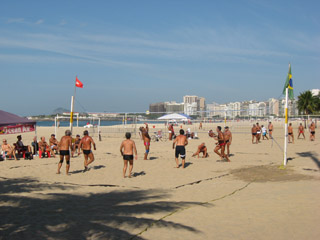 Beach volley is popular with all generations, this is in Copacabana.

Courts for Foot and Beach Volley in Rio

It’s not hard to find courts on the beaches in Copacabana and Ipanema, the tricky part is to find them empty. In general you’ll find free ones weekdays from say 9 AM until 3 PM, early mornings and from 3 PM onwards weekdays. On sunny weekends it can be really hard to find available ones at all. If there are some players around make sure to ask them it’s ok to use the court. You shouldn’t pay rent for any nets and you have to bring your own ball. Joining games is harder since if all players don’t measure up in volley you don’t get a nice game going. But if you know how to play it’s easy to join and almost for sure you will be invited to play again.

Don’t be stupid! Put on lot’s of good sunscreen and maybe a T-shirt (even though it’s cloudy). The sun can be a killer so if you have sensitive skin you have to be extra careful. Remember to drink plenty of water!