Dancing in Rio – Some Info With Links and Addresses

Dancing in Rio de Janeiro is popular, both young and old dance. There is the elegant couple dancing, the intense Samba and the fun Forró. To start with I want to explain a little about the different dance styles that are popular here.

Dancing in Rio and The Different Styles

Dança de Salão Translated to English it’s ball room dancing. Can be referred to classic couples dances like waltz but most of the time it refers to…

Samba de Gafieira It’s how the ball room dancing has evolved together with the Samba (that in itself evolved with influences from both Jazz and other latin music styles). There are many variations but all of them are pretty tricky to learn. It’s not an easy dance. 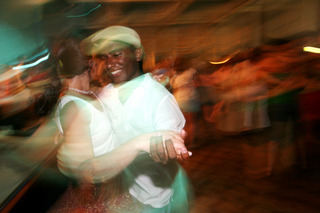 Forró A dance from the Northeast that have evolved with various influences, the music is often accordion based. The dance is easy to learn though there are more advanced moves that can make it a real challenge. There are two versions recognized; The more sensual “Forró nordestino” and the more technical “Forró universitário” that you see people dancing in Rio de Janeiro.

Zouk-Lambada The popularity of Lambada is long gone but it’s evolved form Zouk-Lambada is still very popular. The moves are the same but the music is more rhytmic.

Samba-Pagode A light version of Samba with roots in the classic, simple and romantic Samba-choro. Easy to dance to and today is what you are most likely to see young people dance if it’s not Forró or Baile-funk.

There are a quite a few dance schools in Rio, the ones I have listed are mostly picked from Riotur’s (the official Rio tourist organ) homepage and are not there because I consider them to be the best.

Rio Samba Dancer is offering private Samba and Forró lessons but also does a Samba initiation and “Samba Night Tour” where he will show you the basics of Samba (or Forró if you prefer) and take you to a club (usually Rio Scenarium) to practice your newly acquired skills!
e mail: [email protected], tel 98229-2843
Link: Rio Samba Dancer