How to deal with safety in Rio de Janeiro

Many first time visitors wonder about safety in Rio de Janeiro. They basically expect, after leaving their hotel, to be robbed at the first street corner they’ll pass by. This is maybe a bit exaggerated, but not a surprise either. The city is not only famous for its beauty, chill vibe, beaches, and lush green hills, also Rio de Janeiro is known as unsafe. A quick Google search could lead you up to all sorts of stories about petty theft, gang wars and shootings. It’s easy to get carried away by all this. The chances of being robbed are not that different compared to other big cities in Brazil, for example São Paulo or Salvador, or even big cities in South America. 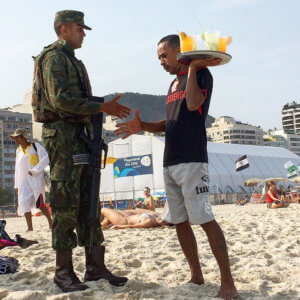 You will find out soon that the safety in Rio de Janeiro is not as bad as advertised. That you actually can walk around feeling relaxed and enjoy the new surroundings. In other words: the city is safer than the traveller had assumed beforehand. Having said that, Rio is a metropolis of more than six million inhabitants and you need to be alert and cautious — as in any other big city. Safety can never be guaranteed. Use your common sense and be mindful of certain things before heading out there.  Here we’ll describe some basic guidelines about safety in Rio de Janeiro and you’ll see, everything will be fine.

The moment you leave your hotel, or apartment, you don’t want to stand out too much. Try to blend in with the local crowd. Don’t dress up like you’re going on an African safari, with khaki pants and matching hat. Discard your sandals and white socks — you’re not in France — and put on a pair of Havaianas. Walk around with confidence, like you know where you’re going. You want to check a map on your phone? Do it in a café or shop, don’t stay on the streets watching your phone for minutes at every corner.

Carrying around fancy women’s purses is not recommended either. The use of a non-descriptive small backpack is preferable. Necklaces, watches, and other shiny ornaments, especially the gold ones; leave them in your hotel room. Why draw unsolicited attention? Thus be aware of which valuables you want to bring: enough money to do the stuff you want to do. Debit cards are also good and accepted almost everywhere — in case you lose it, it’s useless without knowing the right pin code. Passports and ID’s are best to be left in your hotel or apartment. Bringing a copy will be sufficient.

Your camera and phone

Can you bring a camera or a smartphone to take pictures? Sure, just don’t walk around with a camera around your neck. Leave it in you backpack and take it out only when you want to take pictures. Same goes for smartphones. While clicking away, be always conscious of your environment, to make sure no suspicious types are hanging around, or passing by on a bicycle — something that tends to happen quite a lot at the beaches —, ready to snatch your camera or phone at an unexpected moment.

If you’re on your way to spend the day at the beach, you might consider not bringing all your gear. If you want to take pictures, go to the beach to take pictures. If you want to hang at the beach, a phone is more than enough to capture you drinking a coconut water or caipirinha at some of the most famous beaches in the world. In general stick to this rule: it is best to bring as little as possible. Just some money for snacks and drinks. Like that, you’ll have fewer worries and can enjoy the beach in a relaxed manner.

What transport to stay safe in Rio

What is the best way to move around? That depends of course where you’re going. The city is full of metered taxis, very affordable compared to cabs in Europe or North America, and in general reliable. Another great option is Uber, about 40 percent cheaper than the taxis. The app allows you to see where you’re going and the price is already indicated at the beginning of the trip. You need of course wifi or mobile internet to order Uber, but it is a very safe and low cost way to travel around. 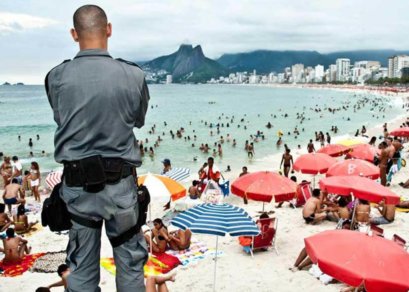 There is also public transport. If you feel like roaming around like a local, taking the bus can be a very authentic experience. Still, the buses in Rio are not very well organized, drive like crazy though, and if you don’t speak Portuguese, it will be a challenge to find the right buses and get out at the right stops. Some embassies actually advice to avoid taking the bus because of security reasons. Petty theft, and sometimes even assaults can happen on the bus. Especially in parts of the city where tourists usually don’t stay, and especially at night. With Uber around, taking the bus with two people or more is also economically less interesting and a lot more hassle. It’s also better for your safety in Rio de Janeiro.

We do recommend to try out the metro of Rio. The network is limited, but it’s safe and well maintained. You can go up and down, between the historical center and the South Zone, with the famous beaches of Ipanema and Copacabana. Nowadays it’s also possible to take the metro to the Western part of Rio, to the neighborhoods of São Conrado and Barra de Tijuca. These localities are especially worth visiting for their beaches, but there is not much else to see.

Safety in Rio: where to go and where not to go

Next is the guideline for where to go. Rio de Janeiro is big, yet in general, travellers only get to see a small part of the city. Favorite areas are the South Zone, including neighborhoods like Copacabana, Botafogo, Lagoa and Ipanema, and the city center and its surroundings, with quarters like Lapa and Santa Teresa. You’ll find two captivating sites outside of the popular tourist localities. The market Feira de Sao Cristovão, with specialties from Brazil’s Northeast, and the Maracanã football stadium, the location of the World Cup final in 2014. The last one is easy to reach by metro, but don’t go walking around the neighborhood, while the best way to go to Feira de São Cristovão is by taxi or Uber (also to return). This is for sure the best way to keep your safety in Rio de Janeiro.

You don’t need to go to the North Zone. You might find some interesting corners there, but in general, it is an area dotted with slums, impoverished lower-middle-class neighborhoods and not very safe.

At night: you can walk around in the right neighborhoods, however avoid empty streets and spaces. A good rule is to hop in a taxi after 10pm. After a night of clubbing, with high outside temperatures, don’t go for a stroll to get some fresh air, especially when drunk, even if your hotel is a ten minutes walk away. Always take a taxi or an Uber.

Last but not least: if you get robbed at one point, be as cooperative as you can and just hand your stuff over and accept your loss. Don’t think you can overpower your robber; he might be carrying a weapon and won’t hesitate to use it (with possible fatal consequences). Or he has some accomplices waiting around the corner to give a violent helping hand if needed. When it comes to safety in Rio de Janeiro, stick to these guidelines. It is almost like mathematics, by doing the things mentioned in this article you lower your chances of getting into bad situations significantly. And in general: be smart and use your common sense.