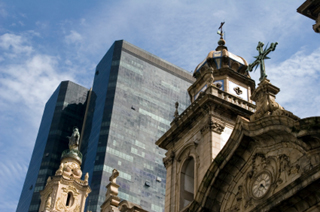 The Centro in Rio, or the city center, is the oldest neighborhood and where Rio de Janeiro was founded. Today it’s a commercial and administrative place were street vendors and men in suits swarm the streets. 16th century monasteries mingle with modern skyscrapers. Shopping in Centro is an attraction, if you want to know more about that click here, otherwise this city walking tour below takes you to most places of interest.

Start with catching bus 123 (to Praça Mauá) from Zona Sul and get off at Praça XV where you have a few buildings of interest, Paço Imperial (The Royal Palace) is one of them. Walking up R. Primeiro de Março you will pass by Centro Cultural Banco do Brasil (CCBB) where you have various exhibitions and cultural events. Just up Av. Presidente Vargas you have the beautiful church Candelária where the interior is of most interest. After this you continue along R. Primeiro de Marco and at the end turn left at R. Dom Gerardo, soon you will have a small street steeply climbing the hill on your right, enter there and you will soon come to the cool 16th century monastery church São Bento (open everyday 8h/11h and 14:30h/18h), the actual monastery is closed for visits. Now it´s time to go to the Arabian market and the shopping in the area Saara, go back down the hill turn right and at Av Rio Branco turn left, back on Av. Presidente Vargas you turn right and cross the street at R. Uruguaiana. You are now in Saara. Here you have an Arabian flee market and also the adjoining streets are full of little shops. Having a coffee break at Confeitaria Colombo on R. Goncalves Dias 32 map is well recommended, founded in 1894 the place is really nice and genuine, the interior is an excellent example of Art Noveau.

Now walk back to R. Uruguaiana and walk to Largo da Carioca, here you are close to the station for the train to Santa Teresa and also the Metropolitan Cathedral if that is of interest. Now walk enter Av. Treze de Maio until you reach Cinelandia, here you have the National Library (guided tours mon-fri 11h and 15h, you have to call 2220-9484 before to book), Theatro Municipal (for visits call 2262-3935 before to book). Of interest here is also the cinema Odeon, the oldest in Rio with lots of cultural events and independent films. Going back is easy since there is a subway station here at Cinelândia. 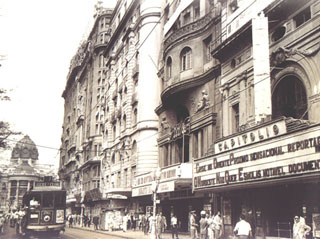 The First Favelas in Rio

Reputedly the word favela comes from a time when some soldiers without any place to stay decided to populate some hills in Centro in Rio. One of those hills was covered in a plant called fava and these kind of settlements became known as favelas. One of those is Providência located not far from Centro, it is considered to be the oldest in Rio and dates back to the late 19th century.

When in the city center, it is also a great option to visit the Morro do Conçeição, the oldest neighborhood in Rio.