Here continues my article series about names of neighbourhoods and places in Rio. This time I will bring up Flamengo, Tijuca, Muda, Laranjeiras and Urca. 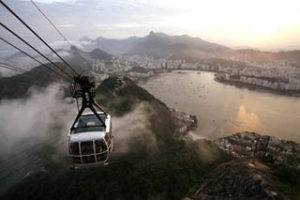 View of Morro da Urca from the cable car on the Sugarloaf, photo by Andreas Lönngren.

The theories of where the name of what was once perhaps Rio’s wealthiest neighbourhood are several. The first connection most people make is with the bird and actually it might be an accurate one. Flamingos are not endemic to Rio de Janeiro, they had supposedly been brought from the Mediterranean and procreated so much they were abundant during the 19th century. Other, more accepted theories have relation to the Netherlands since the word Flamengo was used to describe a Dutch person for a long time in Brazil. A influential Dutch man called Joost Vrisberger is supposed to have lived in today’s neighbourhood and eventually that gave the name to the neighbourhood. Other sources claim that Dutch prisoners brought from Pernambuco (that for a period during the 17th century was controlled by the Netherlands) ended up living in the area.

In the Indian Tupi language ty îuk means bad water and that’s where Tijuca is derived from. Before the neighbourhood was developed there were several small bogs and lakes in the area with still standing water.

Muda – The Place to Change

This neighbourhood located in Zona Norte got its name from either one or two reasons involving horses and change (Por: muda). The first is that horses had to change shoes leaving or entering the muddy Tijuca area. The second is that the pairs of horses pulling the trams up the hill to Alto da Boa Vista were changed in Muda.

Urca – Named After a Type of Ship

There are not many theories surrounding this name, I have only come across one. The name comes from what a type of transport ship was called. It was of Dutch origin and used to transport raw sugar cones. The hill was supposedly given that name both from the similarity between the Urca hill and a sugar cone and the fact that the ships were loaded and unloaded there. The name is very old.