Brazilian food – Manioc Root, or cassava, is a local favorite 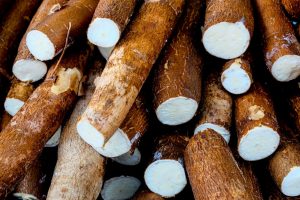 The Brazilian food culture is greatly influenced by the Portuguese and by the slaves that were brought from Africa. But manioc root is one of the ingredients in the Brazilian kitchen that was already used before the arrival of these two cultures. The natives were the ones to domesticate it and create an important place for it in the daily diet of Brazilians, until today. In Brazil there is one tuber that is capable of creating stronger reactions than any other, the root of the manioc. It has an important source of carbohydrates and is processed and used in innumerable ways.

The Many Names of Manioc Root

In English manioc root can also be referred to as cassava or yuca. In Brazil common names are mandioca, aipim, maniva and macaxeira; there are several more. Most of the names are of Indian origins. The expression “dear child has many names” applies quite well, it has been and still is important for the sustenance in the country. You will find it in lots of dishes prepared in tens of restaurants in Rio de Janeiro.

The greatest benefit is that it can grow practically anywhere since it is very drought resistant. The fact that it is poisonous (some cultivars more than others) and has to be prepared before consumption also makes it resistant to diseases and that parasites and most animals leave it alone. Its endemic origin is in Brazil, it would spread and be cultivated in most tropical parts of the Americas. After the arrival of the Spanish and Portuguese tto the continent he crop would spread all over the tropical world, especially in Africa it became an important staple.

How to Prepare Manioc 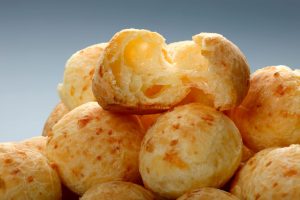 There are numerous ways this plant is prepared and utilized for culinary ends. The less poisonous varieties are often just boiled and fried. Numerous types of flours are obtained through different preparation methods, they are commonly referred to as farinhas de mandioca (farinha means flour). A starchy powder is called farinha de tapioca or polvilho, it is used to make the pancake like tapioca so typical for the Northeast of Brazil and the national addiction pão de queijo, which is a kind of cheese ball. You can get tapioca en pão de queijo at every bar around the corner and it is typically eaten during breakfast in Rio, especially Rio, but basically all over Brazil.

A yellow starchy juice obtained from pressing manioc root is called tucupi, it is used in tacacá which is a signature dish of the North. Maniçoba, is a stew made with dried manioc leaves, a dish typical in the northern state Pará. Cauim is a traditional alcoholic drink of Indians that can be based on chewed manioc meat.

One of the most famous legends of Brazil is about the origin of the manioc, there are several variations on the same theme: A young Indian girl gets pregnant out of marriage, her father who is the chief gets furious. The girl insists that she is a virgin, the chief did not believe her and wanted to sacrifice the daughter to calm the gods. In a dream of the chief a white man appears telling him that the girl is telling the truth, after then he changes his mind. She gives birth to a daughter who is white and already knows how walk and speak before she completed her first year. The girl named Mani from no obvious reason died after a few months, she was buried in her hut (Por: oca). The whole tribe mourned the popular daughter of the chief and started to visit her grave, after some time a new strange plant sprouted from the ground where she was buried. They decided to dig her up but only found this big edible tuber, it had brown peel and was white on the inside. The tribe was starving at the time so the new crop saved their lives. They named the tuber after the girl (Mani) and the place she was buried (oca). manioca which later became mandioca. There are several other legends, all of them describing how the manioc saves people from hunger.

Another interesting aspect it has in Brazilian culture is through the term farofeiro. Farofa is most often made with fried manioc flour and ingredients like bacon and onion. It is used as a side dish with many of the most common Brazilian dishes like rice and beans and fried chicken. The dish has a rural origin and an association with poorer people even if it today is popular in most levels of society. The term farofeiro is often used to describe someone who is uneducated and sometimes also as someone you cannot trust. In modern times the term has translated to describe lowly behaviour on the beach, poor families supposedly bring chicken and farofa which they eat on the beach while littering and playing loud music and drinking beer they brought in large styro foam boxes.

Mauá Square in Rio, back as one of the hotspots in townPraça XV square in Rio is where it all began
Comments: 1