Leme — a tranquil neighborhood with lots of suprises

As a tourist, it is easy to overlook Leme, located next to Copacabana which is famous for its beach and attracts a great deal more visitors. Some will be pleasantly surprised with the tranquility of the small neighborhood of Leme, possessing an underrated version of the beach of its next-door resident. Leme is strategically located, it’s a short ride to Copacabana, Ipanema and Leblon, but it also relatively close to the historical center. 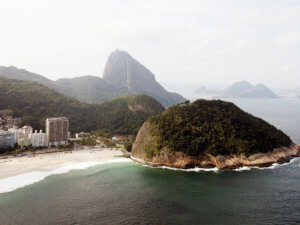 The neighborhood is quiet in its existence, but those who visit will be instantly captivated by the relaxed environment and the activities available. A walk up the mountain of the Forte Duque de Caxias map, a military base, thoroughly rich with nature and bouncing monkeys. Perhaps a cold handmade beer in one of the newest hipster bars that are accessible in Leme. Or a ride on a wave at the local surfers’ favorite spot, beside the mountain at the end of Leme, with kiosks that serve fresh coconuts.

The towering Hilton Hotel, across the street from the beach, marks the end of Copacabana and the beginning of Leme. From there on to the very end, you are in Leme. It’s divided into three parts: the beach (and boulevard), the highrise buildings and the favela community on the hills. There is a lot to do in the confinement of these measures.

Once at the dead end of Leme, Forte Duque de Caxias (the military base) is the entrance to a beautiful trail up the hill, a pleasant and easy walk of 25 minutes. After the trail, there will be a view of Leme and Copacabana beaches, the favelas Chapéu Mangueira and Babilônia, and an exposition of out of order cannons that were used in the past. It is a good idea to bring a water bottle to refill at the top of the mountain. 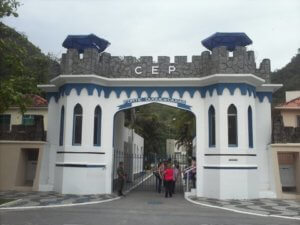 At the foot of the same mountain, to the right of the Forte, there is an area with kiosks, live music, and breathtaking sunsets. The space extends with a path above sea level, curving around the mountain; there men and women busy fishing will been seen, patiently waiting for their next catch. Many adventurous people jump off from there into the ocean, although it is not recommended for the inexperienced. However, if in want of a quick dip in the sea water, there will be safer alternatives to pick from (a flight of stairs that leads down to the beach).

Leme beach is a trendy spot for surfers that come from all over the city to ride the waves of this neighborhood. Besides that, this beach has a reputation for great footvolley and beach volley classes. The training sessions start from 6am and go on till late in the afternoon. It is a way to sweat and enjoy the sun and sand, a must in the Rio de Janeiro experience. 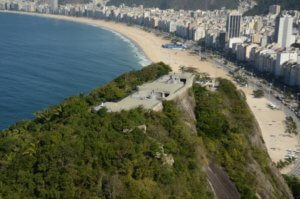 Away from the beach and mountains, there are a lot of cozy bars to pick from in the inside of Leme. In Resenha do Leme Barbearia there is a tasty selection of craft beers and a good shave on the go if in need. The interior is half a bar, half a barber, with the classic barber pole decorating the door on the outside. Mundeco bar has also been making its mark, building a good reputation for a pleasant environment and great special beers. Also, there are a great number of good restaurants, some of the highly recommend.

Get away from the tumultuous part of Rio and cool down in tranquil Leme, whether it’s a beer, food, or swimming in the ocean that does it.