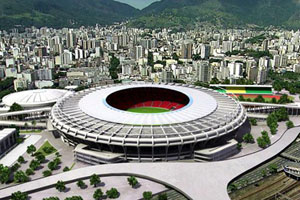 Here is an image showing the new Maracanã.

When the FIFA World Cup 2014 was decided to be held in Brazil it was not a great surprise. Due to the continent rotation system FIFA uses it was South Americas turn and the cup hadn´t been held in this football crazy nation since 1950. The memory of that tournament more than 60 years ago still stings in the memory of most Brazilians. In a absolutely packed Maracanã stadium, reportedly over 200.000 spectators were at the arena, Brazil lost the deciding game against Uruguay and ‘only’ claimed the silver.

Preparations for the FIFA World Cup 2014 in Rio

All over Brazil 12 cities with arenas are being prepared to receive 32 national sides and millions of spectators and tourists. This is the single biggest sport event in the world, everything has to work. The opener is believed to be played in the New Corinthians Stadium while the final game will be played in the national arena Maracanã. The latter is currently going under major reformations.

Here is a list of the host cities and their stadiums:

A big preoccupation is how to be able to receive so many people, will there be enough beds available? The organization is actively working on it. Airports are also being upgraded. A high speed railway is planned between Rio de Janeiro, Campinas and São Paulo. Loads of construction work is going on, tax reliefs have been applied to make the money ear marked for the World Cup 2014 last longer. Measures have also been taken against corruption that in Brazilian history has plagued most large scale projects. The games are to be held between the 13th of June and the 13th of July.

This is the official FIFA World Cup 2014 theme song

Tickets for the FIFA World Cup 2014 in Rio

The tickets for the World Cup 2014 have been released but they were hard to come by due to high demand, especially for games with bigger nations in cities like Rio and São Paulo.