Cinelândia Square, once the Broadway of Rio 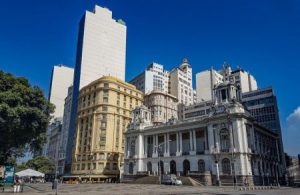 Cinelandia Square in Rio is one of the most important squares in the city. It doesn’t have the same fame anymore as it had a hundred years ago when it was called the Broadway of Rio, but historically it has had a great impact on the development of the city. With three important buildings telling these stories, the City Hall, the City Theater and the National Library.

The main structure of Cinelândia, officially called Praça Floriano Peixoto, was built around 1750. Today’s square started to gain its current shape in the early 20th century, when the Brazilian government considered that Rio de Janeiro, then the capital of the Republic, needed to be completely overhauled.

Beginning in 1904, the centre of the city was remodeled following the latest trends in hygiene and urbanism. The centerpiece of the reform was a large boulevard – the Avenida Central, now Avenida Rio Branco – which was built crossing the old city centre. Most of the old colonial houses in central Rio were demolished and the area was turned into a modern public square. That was the time that the square had a prominent role in daily life in Rio, with lots of bars and cinemas. This was the main reason that the square became known as Cinelandia. 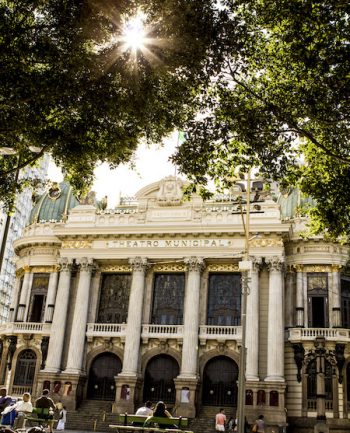 During the early decades of the 20th century the three monumental public buildings mentioned earlier were built facing the square. The Cinelandia square in Rio concentrated a great part of the political and cultural life of Brazil. The buildings surrounding the square, mostly following the French architecture and were a symbol of the modernization of the city.

One of the sad stories of the square was the demolishing of the Palacio Monroe, one of the most beautiful buildings in Rio at the time.The place was were the parlement of Brazil gathered until Brasilia became the capital in 1960. Because of a political fight between the president at the time and a competitor of his, that was the son of the architect of Palacio Monroe, the president decided that the building should be removed. Despite lots of protests Palacio Monroe was taken down in 1976.

These days the square is mainly used as a hub to get from one point to the other. It plays hardly a role in the daily life of the cariocas. Sure, once in a while you may visit a concert in the theater or maybe you’ll go for a quick look in the National Library, but that’s it. The best way to get to the square is or by metro or you can get an Uber. It is good to remember that this area is the commercial and financial center of Rio now, so during working hours it is busy, but in the evening and the weekend it gets more quiet with more poor people on the streets. You can visit this area, but it is important to stay alert. Make sure to know about safety in Rio de Janeiro to avoid any situation.