More love for the bike in Rio de Janeiro 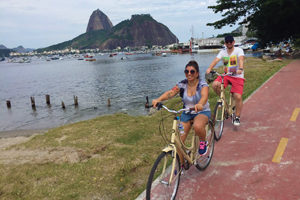 When you think about Rio de Janeiro, you probably think about the famous things like Christ the Redeemer, Copacabana, beaches, Sugarloaf Mountain, Ipanema, more beaches. And of all other things you could think of, in none of the traditional lists you’ll find something about getting on a bike in Rio de Janeiro. Rio de Janeiro is not known for its accessibility for cyclists, but to biking deserves a bit more love.

Because Rio de Janeiro is the bike capital of South America. With around 450 kilometers of bike lanes, the city skyrocketed to the top spot in the last couple of years. Pushed by big events as the 2014 World Cup and the 2016 Summer Olympics, some serious effort was made to integrate biking more in a city ruled by cars.

Over the last 25 years, biking became more popular in the Marvelous City. Since 1992, when the Earth Summit was held in Rio de Janeiro, every ten-year bike use has doubled. “And the last five years we see a faster increase, with a rise of seventy per cent already”, says Zé Lobo, a Brazilian bike lover who started an organization called Transporte Ativo (Active Transport) to promote cycling in Rio de Janeiro. “We came from far. You have to realize that until the end of the 90s,a bike was described by law as a toy. There was no space for bikes in day-to-day traffic.”

The president of the Cycling Safety Committee of Rio de Janeiro, Raphael Pazos, shares the enthusiasm of Lobo. He thinks that cycling in Rio de Janeiro is entering a new era. “There was a decrease of fatal accidents in the last years. With the extension of bike paths, the government is sending a message to everybody, to make more use of the bicycle. And more cyclists on the streets mean more safety, for traffic will get more used to them.”

Tours on a bike in Rio de Janeiro

For anyone looking for a ride on the boulevards of the famous beaches of Copacabana and Ipanema, along the Lagoa or all the way to the city center, we are offering guided tours. The more adventurous souls can rent bikes at Rio by Bike. 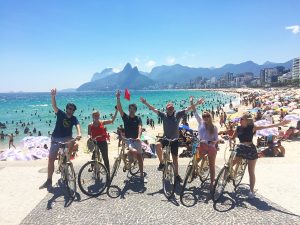 Bicycle activist Lobo thinks everyone should hop on the bike to get to know the city. “Biking in Rio de Janeiro is a special experience. The incredible views and the amazing energy, make it a great way to experience the city in a different way.”

So, now it is time to ride a bike! Read our blog about the tour and check all the tour details here.