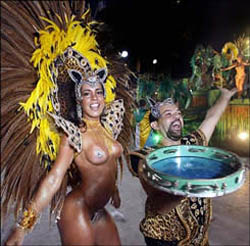 The Rio Carnival 2017 starts on the 24th of February and go on until the 28th. These dates change every year, it is usually in February and sometimes in March. The Carnival officially lasts four days starting on Saturday and finishing on Tuesday. I think it is better to see Carnival as starting on Friday night and finishing on the Wednesday when the judges announce the winners of the Samba parade competition. On Saturday after Carnival there is also the “Winners Parade” where all the best schools parade for one last time.

Another way to look at this is that there is a Carnival season starting in January when increasingly more and more festivities occur until culminating on Carnival Tuesday (also known as Fat Tuesday). To get a complete experience of Carnival in Rio you should probably stay here all the way from New Years until after Carnival.

Carnival Sunday is 49 days before Easter Sunday and that’s the only sure way to calculate when Carnival will be.

Here are the official dates until 2020:

The so called blocos start to have their parades (or ensaios) a couple of weeks before the start of Carnival, these are many times great fun and definitely worth checking out. Starting in January many Samba schools perform shows, in Lapa you often have live performances of dancers, singers and drummers. On top of this you also have various shows and events in nightclubs and concert venues, there is plenty to do!

Sunday the 26th of February

Monday the 27th of February