When is the best weather in Rio de Janeiro? – visit Rio 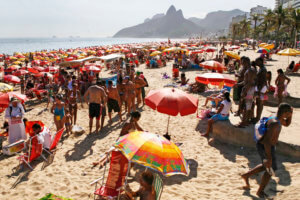 Rio de Janeiro is a city that is associated with sun and sea. It’s especially renowned for its outdoors lifestyle, with all those beautiful beaches around the corner. It is a town where the summer never seems to end. You know that after every couple of days of rain, the sun inevitably will return and shine through your windows again. Having said that, the climate here changes as well. It may come as a surprise, but  there is quite a lot of rainfall in Rio de Janeiro. The difficult question is therefore: when is the best time for good weather in Rio de Janeiro?

For starters, as Brazil finds itself in the Southern Hemisphere, its seasons are opposite to the ones in the Northern Hemisphere. You speak of summer and winter, even though the sunny winters in Rio in many European countries would be considered as great summers. However, you can get unlucky and arrive for a stay of three days and have a very rainy experience. Unfortunately, it does happen (here some tips for in case you’re one of the unlucky few to visit when it is raining in Rio de Janeiro).

The answer to the question what would be the best time to visit Rio is of course very subjective and weather in the city – and in general – is very unpredictable. It all depends on what you prefer. The summers, from November till March, are generally speaking hot and humid. Temperatures between 30 and 38 degrees Celsius (86-100 Fahrenheit), or even 40+, are pretty standard in these subtropical months. 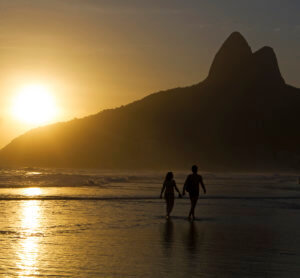 Yeah, it is hot, especially when you’re not used to it. Luckily, during this season the sea is cold, for if you need to cool down a bit. Most of the rain falls during the summer months as well. Just for your info, December is the month with the most rainfall and rain days. But short and heavy rainfalls mostly occur at the end the day, without spoiling the beach fun too much.

Sometimes it gets that hot that even the locals want to flee the heat of the summer and they travel to the mountains where it’s a lot cooler. A fun fact about Rio de Janeiro is, that it was once the capital of Portugal and the Portuguese royal family lived here. For them the summers where to hot, so they build their palaces in the mountain town of Petropolis. When you have the time and want to flee the summer heat as well, it’s great to go here in summer. To visit the palaces, local breweries or make a hike up in the mountains. And it it’s only one hour by car or bus from Rio.

The summer months are the holiday months for Latin Americans. Lots of travelers from the region flock to Rio to enjoy the sunny days. Also, the cariocas themselves, spend more time on the beach, enjoying a late sunset. A great advantage of this time of the year is that at night, the city really comes alive, with the temperatures cooling down a bit. Everybody is outside, on the street. There is always something going on, from street parties to smaller get togethers at bars.

After the hot summer, the months of March, April and May will still offer the visitor warm days, but not as hot as during the summer. May is a popular month for travelers from Europe, because of school holidays in different countries. It is a great time for weather in Rio de Janeiro, with plenty of sunny days and less rain.

Rio’s winter falls in the months of June, July and August. In the early mornings you might even see people with coats on, sometimes even with woolen hats. The locals are oversensitive to lower temperatures. But don’t let appearances fool you, because Rio’s winters are great. With temperatures up to 28 degrees Celsius (60 degrees Fahrenheit), the weather still is excellent for spending your days at the beach.

The humidity is much lower and rain statistics also favor the winter months — it’s the season with the least rain. No need to switch on the fan or air conditioner at night and it gets dark after 5pm. It’s also peak season for tourists from North America and Europe. During these months the difference in temperature is really small, so it is much easier to adapt to the weather in Rio then during the hot summer months – when the Northern Hemisphere is dealing with cold winter months. 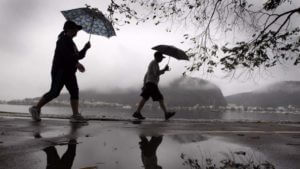 In October and November, the weather in Rio de Janeiro is more unstable. Temperatures will start rising again, and cloudy, rainy days may occur more often. During these transitional months it is definitely low season, so there is less people at the Christ Statue, Sugarloaf Mountain and other highlights in Rio. If you’re not a big fan of the beach, and don’t care about a bit of rain, or unstable weather, it may be a good time of the year to visit Rio de Janeiro after all.