Football in Rio – Where to Practice Soccer, Futsal and Beach Football

Futsal, beach football and football in Rio de Janeiro is everywhere. Chasing down that ball is one of the favourite pastimes for the Cariocas. Before work, after work, during work, on the beach, on the streets; all the time and almost anywhere. I remember the first time I landed in Rio; As the plane was taxing in, right there, next to the runway, was a grassy patch with two goals and parts of the airport work force highly involved in a football match! But how do you get to play it? There are three popular forms of football in Rio:

Football on the Field

Or soccer as it is called in US is the national sport and the interest for it is extremely high. Actually playing it unorganized is a bit tricky. There are some open courts in Botafogo; After some asking around you should be able to join the fun. Some matches are league games but there are many open that you can join. 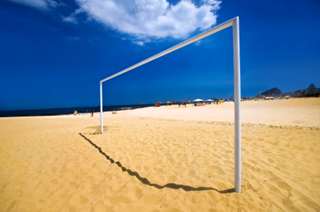 Play beach football on your stay in Rio?

This is the easiest, just get a few guys together and get a football. On both Copacabana and Ipanema Beach there are various goals. It’s easier weekdays during office hours since there are less people. If you want to join an existing game with Brazilians, just hang around and ask. But be prepared, it’s a hard hitting heavy game where physique is more important than technique. The ball is kept in the air because it’s almost impossible to pass the ball on the ground.

Or futbal de salão is a really popular game practiced indoors or on small grounds outdoor. The floor is concrete, it’s a really technical game. Playing futsal is not something you can just do, you’ll have to join a club or rent a court (finding one is hard). Arranging this from back home might be a good idea. Try the page Rio Futsal and you will find some clubs you can contact.