The summer is in full swing in Rio and only a few weeks from Carnival. There are lots of great events and we are sure you will find something for you to do while hanging out in the Marvelous City. Just have a look at the events in Rio de Janeiro this week and make sure you don’t miss out on the fun.

The best street party in town on a Tuesday. Nothing to fancy, just a nice place to hang out with the locals, grab a beer and talk to your friends. Starting after work and goes on until midnight. If you are still around at closing time, you can continue your night at Emporio, a small club with awesome rock music and the possibility to party until the early morning.

A cool event for people who want to practice their language skills and easily meet up with other gringos and locals. You get flag stickers for the languages you speak when you enter and then the conversations start flowing. The event is usually attended by 50% foreigners and 50% Brazilians who love to practice their English, or other foreign languages, with you. Have a drink, meet new people and make a dance, because there is a DJ as well. Location is Jungle Garden Pub in Botafogo map.

A great party with a famous carnival bloco Amigos da Onça and DJ’s to get the feel of Rio’s Carnival. It starts at 21h, entrance R$ 20. The location is HUB-RJ map, in the Harbor area. Have a look at the event page on Facebook. We advice to go by Uber.

True Latin party in Zona Sul! Prepare to spend the night with lots of salsa, reggaeton, cumbia and bachata. Two for one drinks all night long. Also, beer and caipirinha for free from 10pm until midnight. It can’t get better than this. Price is R$40 at the door getting there until midnight and R$50 after that. Venue: New Mariuzinn in Copacabana map

Every Wednesday you will have the perfect Carioca deal at Arco dos Teles map in the City Center: Futebol and Samba. Watch a soccer match on a big screen with the locals and enjoy live Samba music. It starts at 18h.

A cool local party with the typical Brazilian forró music. It starts at 22 hours and is held at Dumont Arte Bar in Gávea. map If you write your name on their Facebook Page you will be on their “list of friends” and you only pay R$ 20 when arriving before the band starts. 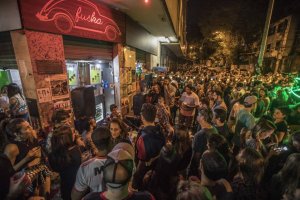 One of the fan favorites of the locals. The so called roda de samba started a couple of years ago and is now the place to be on a Thursday night. Outside of a little insignificant bar in the neighborhood Humaíta hundreds of people enjoy the music, beer and the conversations. This area is pretty interesting since there are a lot of restaurants that are worth going to. Definitely not a place where you will find lots of tourists, but a great local experience. it starts at 19hr and the music stops playing at 22hr. After that the bar is open until after midnight to have some drinks before leaving. map.

A cool event for people who want to practice their language skills and easily meet up with other gringos and locals. You get flag stickers for the languages you speak when you enter and then the conversations start flowing. The event is usually attended by 50% foreigners and 50% Brazilians who love to practice their English, or other foreign languages, with you. Have a drink, meet new people and make a dance, because there is a DJ as well. Location is Ipanema Beach Hostel. map

Bangalafumenga is a well-known ‘bloco de carnaval’ in Rio de Janeiro and they will make you get ready for carnival with them on January 31st. Tickets will start selling soon at Fundição Progresso’s website.

Go to Santa Teresa to enjoy good Jazz music in one of the famous sights of the neighborhood. Parque das Ruínas has an amazing view and unique architecture, a perfect atmosphere for a Jazz night. The event starts at 6pm and tickets are R$30. Be aware that the place only holds 300 people, so get there early or buy your tickets beforehand contacting them via Facebook messenger.

Rio’s most popular street market that is held every 1st Saturday of the month. The market is in Lapa, Rua do Lavradio (map), from 10h till 19h. You will find art, antique, clothes, food and live music and performances. Read our blog about this market.

Spanta is one of the bigger music events in Rio de Janeiro, with over 50 attractions divided into 4 days of party — during January 11th, January 18th, January 25th and February 1st. Among the attractions are Sorriso Maroto, Vitor Kley, Mc Rebecca, Kevin O Chris, Luan Santana, Ludmilla, lots of different samba schools and also ‘blocos de carnaval’. This is going to be huge! Click on this Facebook event to check all the attractions and the dates they are playing. Tickets are ranging from R$120 (half price for one day) to R$800 (full price for the 4 days of festival). Venue: Marina da Glória map.

A free concert at the beach of Ipanema by Martinho da Vila; a brazilian Samba legend and singer-songwriter togheter with the popular rapper and singer Criolo. It starts at 17.00 hours and it is at posto 10. But it will be impossible to miss, since it is a big stage and a lot of people will be there assisting the show. Afterwards there is a beach party. 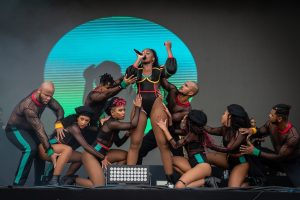 A free concert at Ipanema Beach by popular Brazilian singer IZA. It starts at 17.00 hours and it is at posto 10. Afterwards the beach party goes on with Samba que elas querem.

A great Samba party in the garden of a house at Gigoia island. Officially the party starts at 15 hours, but we advice to arrive around 17 hours. It goes on till after midnight. If you arrive before 18h the entrance is free. This is great to combine with an afternoon visit to the island which is located just behind the Jardim Oceanico metro station. map

One of the most traditional samba parties in town. It is for free and starts at 19 hours. Don’t bring a lot of stuff and arrive and leave with a taxi, since the area around the place where the samba takes places is a bit dodgy at night.

The other side in Mangueira - favela in Rio
Comments: 2